Two people are being treated for serious burns after a fire in a commercial building in central Whanganui last night. 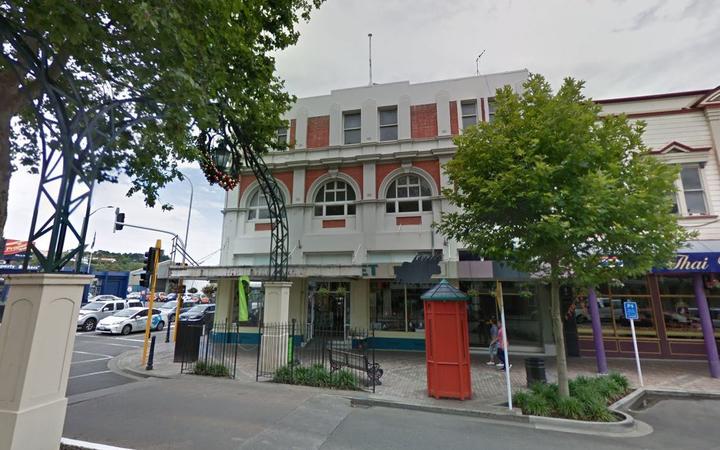 The building at 1 Victoria Ave before the blaze. Photo: Google Maps

Fire and Emergency was called to the blaze on the corner of Victoria Avenue and Taupo Quay about 8.45pm last night.

Shift manager Carlos Dempsey said the rapid progress of the fire meant firefighters could not go inside.

"Several of the interior floors did collapse and there was a danger of some parts of the exterior of the building collapsing so crews have worked from the exterior to extinguish the fire and at this stage we'll be waiting for building engineers to arrive before we make any decisions on whether or not it's safe to enter."

Whanganui Hospital said a 42-year-old man who was burned in the fire was in a stable condition in intensive care, and a 46-year-old man also injured was discharged last night.

The 42-year-old has been transferred to the Lower Hutt Burns Unit.

Whanganui mayor Hamish McDouall said many people in the city suburbs could see the fire last night. The damage to the building, and the fact two people were injured was "horrific", he said.

"Everyone on the hills could see what was going on, and the communications went out very quickly across the internet. I've had reports that [the building is] pretty seriously damaged in the top floors, and it's cordoned off at the moment.

"We've got an incredible heritage main street, and because of its prominence on the corner as you come across the town bridge it's one of three real cornerstone buildings.

The building had recently been saved from demolition when it was bought by a new owner with plans to strengthen it after it received a low earthquake strength rating in a Building Standards assessment, Mr McDouall said.

"The previous owner applied to demolish it, but the application was inadequate, and there was quite a community outcry as well, so the consent was denied by an independent commissioner."

He said that made the fire especially tragic, and assessing the building would now cause a lot of disruption.

"A lot of disruption in the very short time as they assess the integrity of the building, because that whole corner - the town bridge and one of the main cross streets - will be closed."

Mr Dempsey said it was too early to say what caused the blaze, and investigators would start work on that today.

Crews have stayed at the scene overnight to damp down the fire, and investigators will begin their work as soon as possible.

Fire and Emergency called in appliances from Marton, New Plymouth, Bulls and Palmerston North to help contain the blaze.