A man who targeted an Asian family in a road rampage near Auckland last year has been jailed for two years and six months. 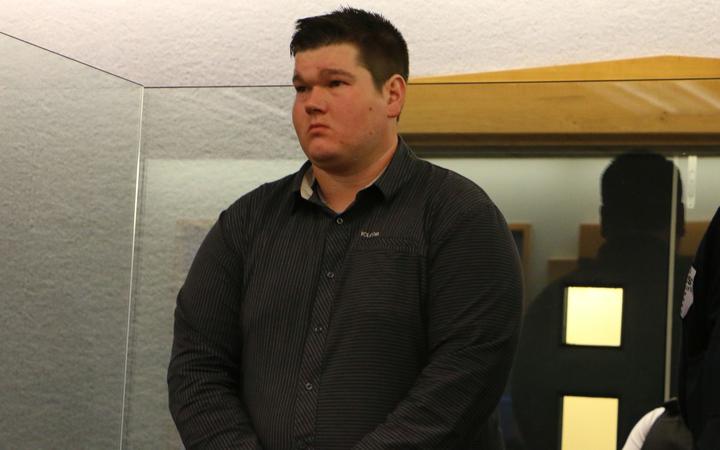 Fraser Milne was driving through Awhitu Peninsula on 4 March when he crossed paths with a Chinese-New Zealand family on a weekend outing in the area.

Believing the victims' vehicle crossed the centre line, the Paeroa man swerved to avoid a collision and hit a fence which caused minor damage to his car.

He chased them down the road, overtaking the car at speed, and forced them to stop before demanding they pay for the damage.

When the driver disputed the blame, Milne swore and shouted at them that he belonged to a gang before chasing them down a second time when they drove off.

When they drove off again the 22-year-old went to the nearby shops and was overheard making racist remarks.

By chance, he caught sight of the victims driving past the shops and got into his car to chase them down a third time, reaching speeds of 140km/h over a 7km stretch.

When the victims refused to stop their car Milne pulled back and hit the back of the vehicle, causing it to spin out of control and flip into the air.

The car landed upside down on his vehicle and slid off the road and down the road when he braked hard.

The court heard the two children, aged 10 and 12, had taken their seatbelts off before the crash out of fear they might need to quickly exit the vehicle and were thrown from the car.

Milne got out of his car and yelled racist slurs at their father until locals arrived at the scene.

All five victims were hospitalised after the crash - the youngest child had a skull fracture, scalp laceration, a small subdural hematoma and significant grazing over their body.

At Milne's sentencing in the High Court at Auckland this morning, Justice Fitzgerald said it was "quite extraordinary" nobody was more seriously hurt in the rampage.

The victims have since sought permanent name suppression out of fear they could be publicly identified and targeted again.

They weren't present in court this morning but spoke through Crown prosecutor Jasper Rhodes, who read their victim impact statements.

The court heard the family had struggled to feel safe after the crash, which came after they had lived in New Zealand for 18 years.

"We have been living in New Zealand for many years. The fresh air; the friendly people; we have felt safe. Since the crash though, I cannot get over what happened.

"New Zealand is such a beautiful country but people like the man are worse than Americans with a gun," the father said.

The mother said their children had been deeply affected by the experience and the family hadn't been on another weekend outing since.

"After the attack [my husband] changed very much. He became very quiet, he did not want to talk and he stopped wanting to go out. He was scared; we were all scared.

"Before you attacked us [he] was a hardworking family man, he looked after all of us, but that all changed after the attack. He became very withdrawn and lost some of his abilities."

The court heard the father had since been diagnosed with brain tumours and his wife now visited him in respite care every day.

"I have changed so much. I worry about everything; noises at night, bad things that might happen again. I don't want to be this way."

The woman said her hair had turned grey and she blamed herself for the crash because it was her idea to go blueberry picking that day.

"We were not rich, we had just a basic life in New Zealand, but we had the blue sky, the white clouds and healthy children."

Milne pleaded guilty to dangerous driving, injuring with intent to cause grievous bodily harm and four charges of injuring with reckless disregard for safety.

Mr Rhodes said the attack was unprovoked, sustained and gratuitous offending and submitted a sentence of eight to nine years' imprisonment was appropriate.

"This is not simply a case of road rage ... ramming a family off the road at 100km/h with intent to cause grievous bodily harm just can't be categorised as simply road rage."

Mr Rhodes said it was a racially motivated attack driven by an extreme and aggressive response to the fault Milne had perceived in the crash.

Defence lawyer Mark Ryan said his client accepted his actions were "atrocious and appalling" but said a lengthy prison term was not appropriate.

He said his client had been driving his father's car at the time and grew angrier as he sought payment for the damage caused.

Mr Ryan said Milne was remorseful, had undertaken rehabilitative work through a Man Up programme and wanted to pay full reparation of $10,000 to the victims.

After hearing submissions from counsel, Justice Fitzgerald did not accept the Crown's submission that the offending was motivated by racial hatred.

"The summary of facts does not suggest you were aware of the victims' ethnicity when you flew into an uncontrolled rage and decided to chase the car."

The judge noted the man had later made "abhorrent" racist slurs but stressed she had to consider if the offending was itself racially motivated.

She sentenced Milne to two years and six months imprisonment and disqualified him from driving for 12 months after his release from custody.