The queue for a hug from former All Black Ian Jones is stretching to the carpark.

He's welcoming diners to the community meal he and his wife Janine Graham-Jones host every Friday night at Rosmini College on Auckland's North Shore.

It's a free feed - dropped off by friends, businesses and local home cooks - and anyone is welcome.

Ian and Janine started Eddie's Meals (named after Ian's swim squad Eddie's Eels) in December because they felt they had a blessed life and wanted to share with others.

Initially they envisaged providing for the homeless or those short of food - and they do - but soon realised need comes in many different forms.

"A lot of the people in this room can afford a meal at home but a lot of them are quite lonely and need some company and some interaction with other people, a reason to come out," he says.

And all sorts of people gather in the cheery room tonight, chatting and lining up to be served macaroni cheese, slow cooked casserole, chicken, chop suey and much more.

Many are elderly but others are new to Auckland, new to speaking english or just keen for a hot meal and cheery company. 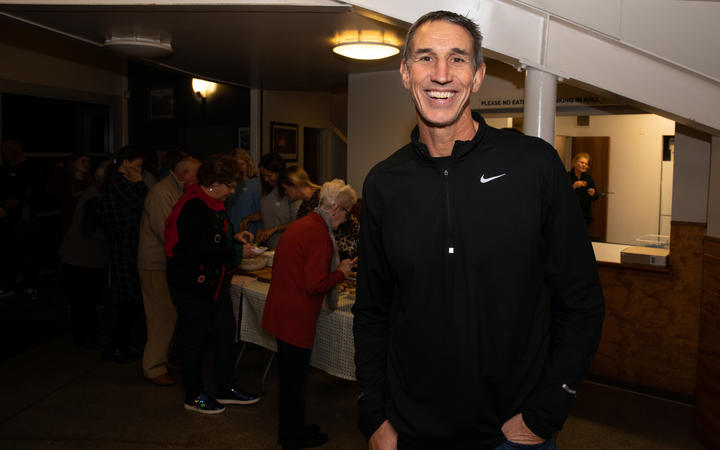 Local man Eddie first popped in a few weeks ago and is now a regular, arriving early to help out.

He's here for the craic, he says.

"I'm alright, I can stand on my own two feet now. But a lot of people don't get out....For a lot of them, you can tell by the level of the chat, they're having a really good time."

There's a group of regulars who rock up after happy hour at their retirement village down the road.

One of them, Eileen, whose family lives overseas, says she loves the chance to mix with younger people after hanging out with only seniors throughout the week.

"And there's the food, it's delicious, and the volunteers, there's so much love here...the currency is love," she says. 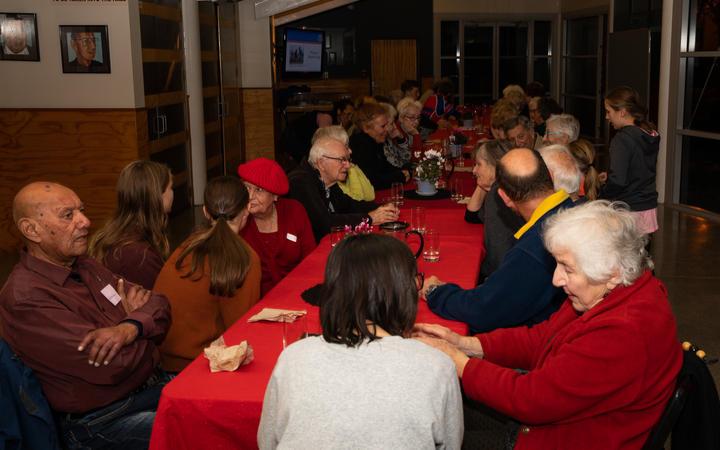 The dinner attracts those who are new to Auckland, elderly, new to speaking english or just keen for a hot meal and cheery company. Photo: RNZ / Dan Cook

"I want to walk around and see your smiling faces when you're eating it. I don't want you to smother it in too much custard and icecream. You will enjoy it!" he tells the diners.

Ian says while some people just pop in to ease the burden on a particular night, many have become regulars.

"The more you give, the more you get back and we all get so much back from these people. They have so much wisdom and so much to offer," he says.

"These people are now my friends, they're people my wife and I look forward to greeting on a Friday night and talking about our weeks."