By George Block from the Otago Daily Times

The Army will dispose of an unstable chemical in South Dunedin tomorrow morning by blowing it up, requiring the evacuation of a large number of properties. 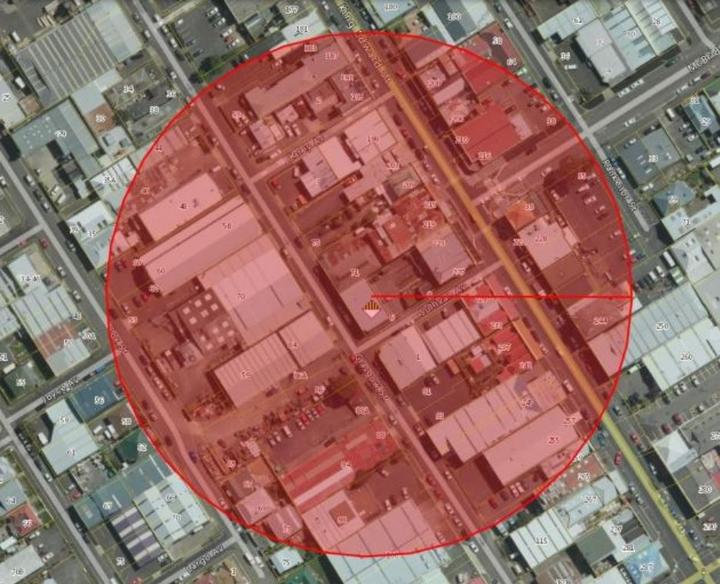 A 100m radius around the Blis Technologies building will be evacuated tomorrow morning as the Army disposes of a dangerous chemical by blowing it up. Photo: FENZ

From 7am, properties in a 100m radius around the Blis Technologies building on the corner of Sullivan Ave and Glasgow St will begin to be evacuated, before the Army Explosive Ordnance Disposal (EOD) team begins its work after dawn.

Properties on both sides of King Edward and Glasgow Sts are affected.

Fire and Emergency NZ Senior Station Officer Rob Torrance, of Dunedin City Station, said the small volume of Hydrazine Monohydrate was seen to have crystalised around the lip of its container this afternoon.

"Once it starts doing that it's quite unstable, if it's moved."

Firefighters and a hazmat command vehicle rushed to the premises of the oral probiotics company shortly before 3.30pm today.

Mr Torrance said the Army had informed crews on the ground the chemical was quite stable as long as it was left on the shelf, but it would become hazardous when moved.

An EOD specialist wearing a heavy armored bomb disposal suit would go into the building shortly after dawn, gingerly carry the chemical outside, place sandbags around the container then detonate it, he said.

This article first appeared on the Otago Daily Times