Social media and pop music are being credited for a marked increase in New Zealanders' overall awareness and knowledge of Asia. 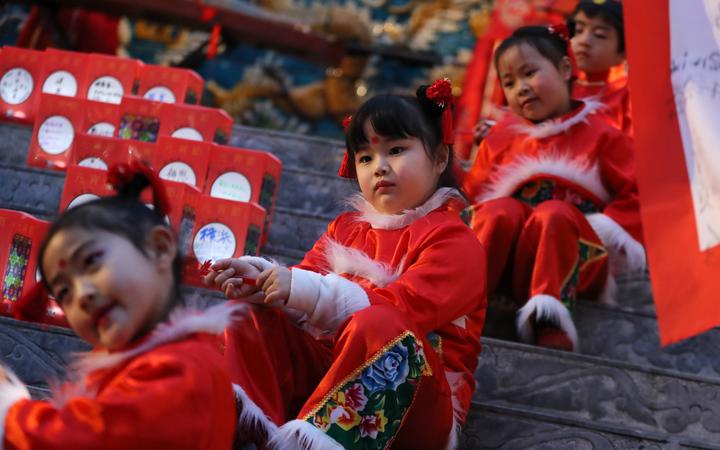 Children taking part in a performance for the lantern festival, marking the last day of the Chinese new year, at Chinatown in Yokohama, Japan in February. Photo: AFP / Yomiuri

An Asia New Zealand Foundation survey showed the number who said they knew a 'fair amount' about Asia has risen from 33 percent in 2013 to 48 percent in 2018.

The foundation said a lot of the change was driven by the under-30s, and they were passing on that better understanding to older generations.

Executive director Simon Draper said it was the first time in 22 years that nearly half of New Zealanders were saying they knew a fair amount of Asia.

"That's a significant improvement, and the more you know about Asia, the more you're willing to improve your knowledge - that's a positive thing."

"That's a bit of work for us at the foundation, just to get a bit more of eveness in New Zealanders' understanding of Asia."

The report said travel had the greatest impact on knowledge of Asia, and people also get to learn more by interacting with Asians at work, or while eating out or shopping.

Social policy researcher Tze Ming Mok is sceptical of New Zealanders' self-assessed knowledge and questioned how meaningful the knowledge was.

"And then of course there is the same old story about the appreciation of the commercial value of relationships with Asian countries," she said. "This, and the going on holiday thing, to me is colonial and commercially extractive narrative of knowledge, and also of value. If you only know me through consuming me, how well do you really know me?"

Ms Mok said there was more work to be done in terms of building relationships between ethnic groups.

"We want to see increasing knowledge and positivity about Asia and Asian people coming from social contact with our communities in New Zealand," she said.

Aucklanders at Aotea Square had varying knowlege of Asia. High school student Niamh Orr-Walker said she didn't know much about the region and was looking forward to an upcoming holiday in Japan.

"We have a lot of Asian students in our school, but I don't particularly know much because I haven't travelled there before. It will be really interesting to learn more about the culture and different parts of it."

Liz Macfarlan said she had been trying to teach herself Mandarin because of the increasing business ties between her company and China. "I feel Asia is a very large concept, so it can include China, right through to southeast Asia, so I would think of huge diversity and culture."

Ms Macfarlan said she learnt a lot more about Asia in recent years because her firm works with people from different parts of the region. There had also been "huge improvement" in the variety of Asian food in the city, she said.

The survey has been running most years since 1997 and 2000 people were questioned for the latest study.