A man who admitted fatally stabbing a Petone pensioner and decapitating him has been given a life sentence and will remain behind bars for at least 17 years. 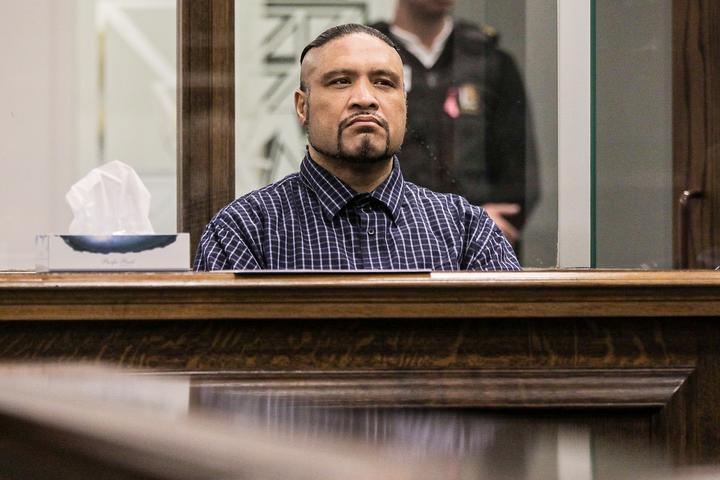 Eugene Baker, 42, was sentenced in the High Court at Wellington this morning for the murder of 71-year-old Francis Tyson last November.

The men lived next to each other in Petone, both sold synthetic cannabis from their homes and they had several arguments in the days leading up to the killing.

Baker believed Mr Tyson had informed on him to Housing New Zealand, leading to his eviction.

On 30 November last year, he went to Mr Tyson's house, demanded he hand over his stash of synthetic drugs and stabbed him five times when he refused.

He left Mr Tyson's flat but returned some time later and decapitated him, Justice Dobson explained.

"It would have taken substantial strength and determination to do that with a bread knife.

"And then using the head like a trophy, walking around in that part of Petone was a seriously gross indignity to the victim, showing a high level of callousness."

Justice Dobson said the indignities Baker inflicted on Mr Tyson's body added to the feelings of loss for the dead man's family.

That was echoed in a victim impact statement from Mr Tyson's sister, Celia Reynolds, which outlined her visit to the mortuary to identify her brother's body.

"You could only see him through a glass window. A body, covered to the neck and two thirds of his head showing, knowing it wasn't attached to his body, decapitated, sent chills down my spine.

"This is my nightmare - a stabbed and headless brother."

Crown Prosecutor Grant Burston said there was an extra element of callousness when, while Mr Tyson was collapsed on the floor after the stabbing, Baker told his boarder to leave the flat because if he didn't he would witness Mr Tyson's beheading.

"And that is the foundation for the Crown submission that that contributes to the callousness of the killing and the cruelty of it - that the victim would have been aware of what was about to happen to his body, having been fatally stabbed at that stage."

He said Baker had been subjected to serious abuse when he was growing but had managed to live a reasonably offending-free life until recently.

"He hadn't committed any offence for several years, I think eight years before this offence. He was workiing fulltime through most of those years.

"He fell into a very, very heavy cycle of substance abuse, with mainly synthetic cannabis and his life completely unravelled and his sense of morality unravelled with it."

Justice Dobson said Baker might be remorseful now but at the time of the murder he had shown no sympathy for Mr Tyson or his family and that attitude had persisted until very recently.

"At the time and for a period thereafter you committed a violent and brutal murder with apparent disregard for Mr Tyson and the huge hurt and loss for friends and family left behind.

"The change of heart is to be encouraged, but in my sentencing analysis, it cannot carry any great weight."

Outside Court, the officer in charge of the case, Detective Sergeant Ben Quinn said he was happy with the 17-year minimum sentence.