Neighbours in west Auckland are rallying to support a family afraid for their safety because of a barrage of death threats, racist messages and dead animals in their letterbox. 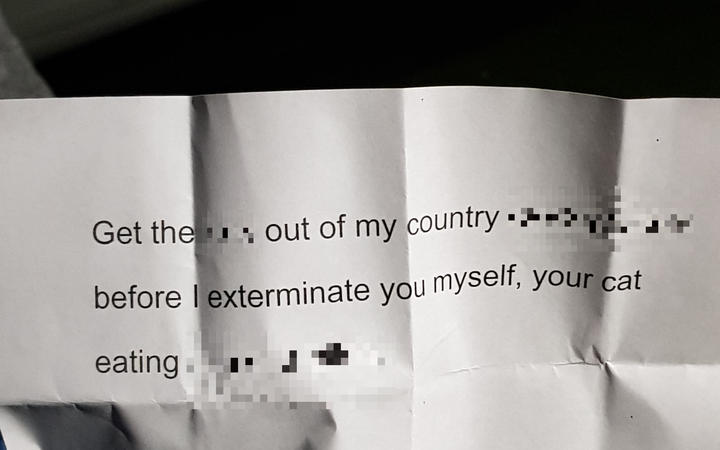 One of their cars was also sprayed with graffiti, and both of their vehicles had their tyres slashed - one while it was parked in the garage.

Police are working to find whoever is responsible for the the incidents, which have been occurring with frightening regularity over the past five weeks.

One of the reasons the young family moved to New Zealand from South Korea about a year ago was because it was meant to be tolerant, inclusive and safe.

But the mother, who doesn't want to be named, says events of the past five weeks - and in light of the racist terrorist attacks in Christchurch on 15 March - have them living in fear.

It started on 28 May when their garage was broken into and all four wheels of their car were slashed.

The car that was parked outside also had all of its tyres punctured.

"They actually broke into my premises and opened the door of the garage and damaged the tyres," she said.

"So we reported it to the police ... We felt that it's a hate crime because obviously someone knew that these two cars belong to us. But police didn't believe that it's a crime and they just said it's just a prank."

They installed CCTV cameras on their property as a result.

Exactly one week later, red graffiti was sprayed across the car which was parked outside the house.

"The guy was captured in our CCTV but it was not too clear. So we reported it to the police again, but they said it's not enough evidence and it's blurred so they couldn't investigate more."

Then dead animals started turning up in their letterbox.

"I had a feeling that they were coming every Tuesday so I was waiting for them. I was watching live CCTV and somebody passed so I ran out. But then we found that somebody put a dead rat in my mailbox."

The attacker apparently became aware the family was onto their habit of striking on a Tuesday, so on Sunday a dead pigeon turned up in the mailbox.

Perhaps the most alarming message came on the following Sunday in the form of a typed letter in their mail box.

It said "get out of my country" and used highly offensive racial epithets. The author threatened to "exterminate" them.

"After that I couldn't sleep at all and I really worried about the safety of my family. And then I was wondering why I had been targeted at all. So on Sunday I realised that was the reason."

Neighbours have been helping the family where they can - cleaning the graffiti off their car, keeping a lookout.

One woman told said that when she saw the letter it made her feel so sick she wanted to throw up.

She said it must have been sent by "one sick puppy", and was horrified that this could be happening to a nice, quiet family with young children.

Other neighbours said a number plate was stolen off their car a few weeks ago.

"A couple of days later our neighbours ... came over and said someone had slashed their tyres, all four of them.

"Because nothing happens on this street - it's a really good street. Hopefully they'll be okay."

The Waitakere area commander, Stefan Sagar, said police were taking what had been happening seriously.

Officers had spoken to a number of people, examined CCTV footage and the property.

He said police would do everything they could to hold those responsible to account and asked anyone with information to contact the Massey police station.