What's believed to be the only copy of Governor William Hobson's original Treaty of Waitangi proclamation of sovereignty - is set to be auctioned and may fetch up to $20,000. 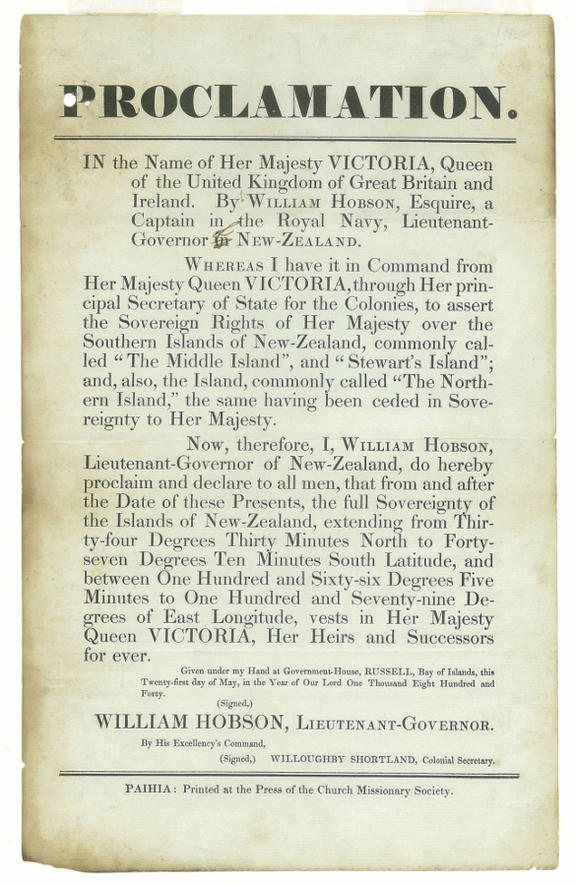 The Treaty of Waitangi proclamation of sovereignty is set to go under the hammer. Photo: Supplied

It's part of the Christopher Parr collection, described as one of New Zealand's finest print collections, that is all going under the hammer at Art+Object auction house in Auckland on Wednesday.

It includes hundreds of books, newspapers, and letters from the early to mid-1800s that Mr Parr, who is the grandson of four-time Auckland mayor Sir James Parr, collected over 70 years.

Art+Object book department manager Pam Plumbly said she believes they have the only copy of the original proclamation by William Hobson from 1840, which was printed with incorrectly defined boundaries of the country.

"That same day it was reprinted with the correct latitude, and I don't think there's another copy of that, I couldn't find one anywhere, and I'm presuming that William Colenso, who printed it perhaps destroyed them, but he kept this copy because he was a printer ... so it makes it very rare."

Another rare item is a copy of New Zealand's first newspaper, the New Zealand Gazette.

A number of letters to and books printed by William Colenso, who was a prominent botanist and New Zealand printer, are up for auction, including a shopping list in William Colenso's handwriting.

From the book collection, New Zealanders Illustrated by George French Angas printed in 1847, with handcoloured lithographs and Edward Jerningham Wakefield's Illustrations to Adventure to New Zealand, the latter of which Ms Plumbly said could reach $15,000.

There had been a lot of interest from the public about the collection, including New Zealanders based overseas and a number of institutions, she said.

The auction is at 12pm on Wednesday 26 June.