The prime minister's daughter, Neve Te Aroha, has received a special and iconic gift from the Duke of Cambridge himself for her first birthday. 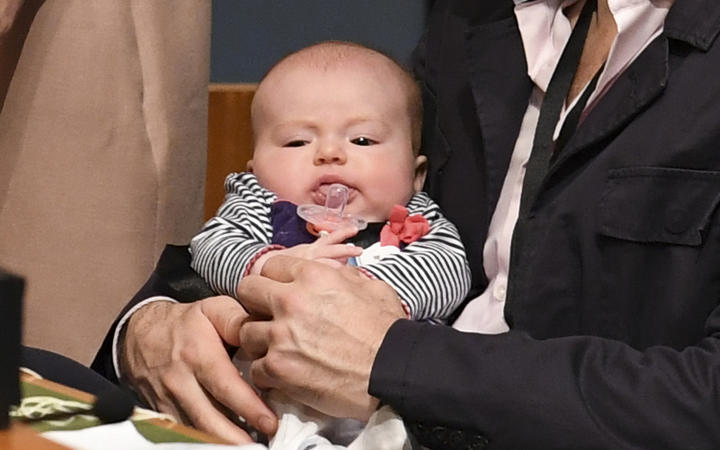 Prime Minister Jacinda Ardern's fiance Clarke Gayford posted on Twitter congratulating Prince William, who shares the same birthday as Neve, along with pictures of the gift.

He wrote: "Torn between letting the 1st birthday girl continue to maul this amazing gift or putting it somewhere safe FOREVER.

"Happy Birthday Prince William, what a great shared birthday (I'm pretty sure you win with this)."

A metal plaque with the writing "Happy Birthday Neve, from Prince William" appears on the bottom of the toy.

Torn between letting the 1st birthday girl continue to maul this amazing gift or putting it somewhere safe FOREVER.
Happy Birthday Prince William, what a great shared birthday (I'm pretty sure you win with this) pic.twitter.com/KvXtOcfmfq

The Buzzy Bee toy resembles a special memory for Prince William from his first trip to New Zealand with Princess Diana in 1983.

He made international headlines when he was photographed playing with a Buzzy Bee toy as a baby on the lawns of the old Government House with his parents.

The prince last visited New Zealand in April this year, to meet with the Christchurch mosque shooting victims' families and those injured by the attacks. He also spent time at an Anzac Day service.

Earlier, Ms Ardern had posted on social media talking about taking on a mission of baking a cake for her daughter, who turned one today. She later posted another message with the final product.

When Ms Ardern gave birth, it made international headlines, as did the child's presence at the UN General Assembly in September.

It was only the second time an elected world leader had given birth while in office, the first time being former Prime Minister of Pakistan Benazir Bhutto, who was elected Prime Minister in 1988 and in 1990 gave birth to her second child.

Prior to her, Queen Elizabeth II gave birth to Prince Andrew in 1960 and Prince Edward in 1964 after her ascension to the throne in 1952. Queen Victoria, Catherine the Great and Cleopatra also became mothers while being leaders of their states.