The centrepiece of the Defence Force's new $20 billion upgrade is being labelled as unnecessary.

After months in the planning, Defence Minister Ron Mark announced his long-awaited Capability Plan yesterday - outlining scores of "essential" purchases for the Army, Navy and Air Force over the next decade and beyond.

"That is a lot of money and defence equipment costs a lot - but again we could have invested in smaller planes and done without the war-making capability that we're renewing," she said.

However, David Capie, from Victoria University's Centre for Strategic Studies, said it was money well spent.

"We're talking about a suite of platforms that are really coming to the end of their lives - the Hercs that are more than 50 years old - the Canterbury which has done, you know, doing terrific service - but at some point is going to need to be replaced."

Chief of Defence Force Air Marshal Kevin Short said the old Hercules had had their day and needed to be put aside to make way for the new ones.

"We've got some pilots who have already flown in the aircraft on exchanges - and one of the reasons for selecting the Hercules is that ease of transition.

"We can't afford to have a capability gap - and that will be absolutely reduced by having something that we're reasonably familiar with," he said.

As well as the investment on new aircraft - the plan also boosted the number of troops in the army by more than 1000. 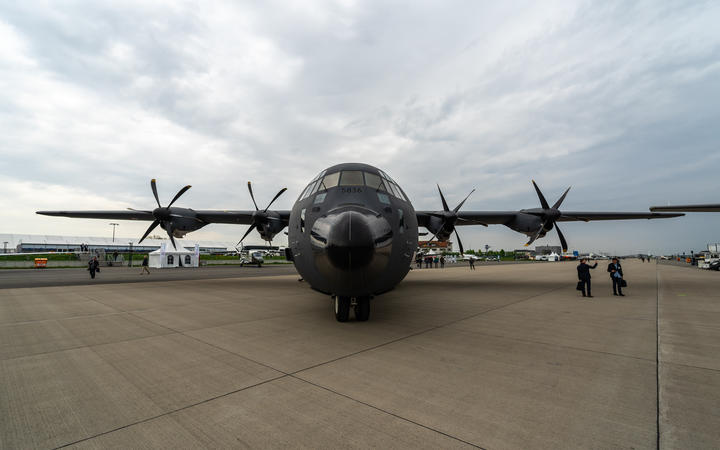 A 'Super Herc', one of several the Government has ordered. Photo: 123RF

"Increasing the troops again means we're preparing for something else - but if the focus of this military is going to be on engaging with peacekeeping, for example, through the UN legal channels - that's something that we can prepare for and we can support.

"We don't support, for example, unilateral types of missions where we're just supporting our so-called allies," she said.

Ms Ghahraman was pleased the defence minister had put climate change in the Capability Plan.

Prime Minister Jacinda Ardern said Pacific nations were crying out for help to address that.

"They've named that in the Pacific Islands Forum as the number one security issue that we face in the Pacific - extreme weather events as a result of climate change are already being felt - and we need to make sure we're equipped to respond to that," she said.

Mr Mark agreed that the purchases, including the Boeing P-8 Poseidon, which has submarine destroyoing capabilities, were designed to align New Zealand closer to the United States and that these would ensure trade passage and free movement of New Zealanders.

"We have always associated, in fact, if we go back to World War I, World War II, we talk about Korea, we talk about the occupation forces that went into Japan, we have always stood firm alongside our traditional allies, who share the same views and values and subscribed to the view the world needed to operate according to a rules-based order," he said.

He denied that talk of the purchases enabling Defence Forces to better respond to environmental and humanitarian disasters in the Pacific and elsewhere was simply good public relations.

"Our largest military deployment and always has been is Antartica, where we work to support the science community to enable them to carry out they're research to better understand what is happening with the planet, to mitigate and offset that [climate change]," he said.

"But, it is just a simple fact that military requires war-fighting capabilities, that's the number one principle that undermines our Strategic Defence Policy statement."

Dr Robert Patman, professor of Politics and International Relations at the University of Otago, said the $20 billion military spend was correct, given the military's aging hardware and the unique geopolitical challenges it now faced.

"We are in New Zealand facing one of the most challenging security environments since the end of the Cold War and it's important because we believe in an international rules-based system and in mult-lateral diplomacy, it's important that we have the wherewithal to contribute to the range of challenges that we face in the Pacific and internationally," he said.

Next on Mr Mark's agenda is to address the old and outdated Defence Force estate, which included reviewing the land, buildings, roads and infrastructure. A report on that is expected this year.