Police in Otago have arrested two men and uncovered more than $200,000 worth of methamphetamine after a series of raids in Central Otago and Queenstown. 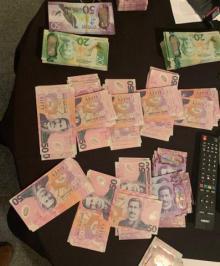 Officers carried out searches yesterday in the tourist resort and nearby town of Cromwell with the use of a detector dog.

A 36-year-old man has been charged with possession of methamphetamine for supply, and a 33-year-old man will face drug-related charges.

The police also seized more than $30,000 in cash found during the searches and ammunition was located at another Cromwell property.

"These warrants are generally related to organised crime and Otago Lakes Police will not let these individuals sell illicit drugs and accumulate wealth at the expense of the vulnerable members of our community," he said.

"It's not only the users that are harmed by the drug, but also the wider community and local businesses."

The warrants follow an arrest in Alexandra last week when methampetamine was found during a search.