A woman whose husband was shot dead as she herself was shot in the head has described to a court how she told a gunman she was pregnant in hopes the man would spare her life. 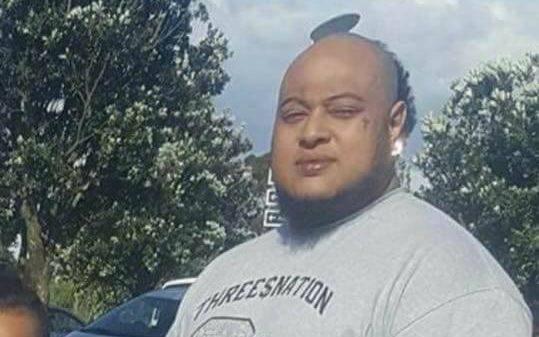 Abraham Tuuheava from Manurewa, who was also known as Epalahame Tuuheava or "Hame". Photo: Facebook

Abraham Tu'uheava was found dead and his wife Yolanda (Mele) severely wounded on Greenwood Road in Mangere at the start of May last year.

One man, Viliami Taani, has pleaded guilty to murder and attempted murder, while two others Fisilau Tapaevalu and Mesui Tufui deny the charges and are on trial in the High Court in Auckland.

Mrs Tu'uheava this morning described how her husband admired the Comancheros gang and had taken $48,000 in carry-on luggage on a flight to Dunedin.

She said that after they returned, her husband met some men at a McDonald's restaurant in Manukau on 30 April.

Now she has described how he drove her to Greenwood Road for what she believes was a drug deal that night: the night he died, and she was shot several times leaving her with a bullet still lodged in her brain.

They pulled over and parked on the side of the road and after a while another car pulled in and parked behind them. Her husband got out and spoke to one of the men while she played a game on her phone.

"I could hear my husband laughing," she said.

However, after briefly checking what was happening in a mirror, she heard her husband scream.

"I heard someone scream my name, 'Mele, Mele, Mele' and somebody hitting the back of the driver's side, that door, someone hitting that window screaming my name.

"He opened the driver door and then he turned around and I remember him going 'please, please don't. My wife, she has nothing to do with it."

"I've never seen him that scared before."

From inside the car she could see what she described as the "main guy" standing with a gun pointed towards her husband, and when she jumped out she saw another man holding a gun.

"I was looking directly at his eyes and I said 'please don't, I'm pregnant' just in the hope he had a heart, like he wasn't going to shoot me'."

She was ordered to stand by a nearby fence where, terrified, she and her husband gripped one another.

"I was scared because, like, far out - this is stuff you watch on movies, not stuff you experience in real life.

The two tried to escape, running down the street and hiding behind a tree. The men followed them in their car and told them to come out.

After getting to her knees she was shot.

"All I remember hearing was just bang, and my arm fell and I knew something was wrong because when I was trying to get it up it wouldn't move, like it felt like my had was swollen or something.

She was shot in the arm again, and this time she said she could feel and watch the blood pouring out.

She said the "main guy" emptied his gun at her as she fell to her side where she could see her husband kneeling nearby.

"I don't know if he knew I was still alive but when the guy was turned around to go get bullets and reload I see my husband look at me, then he looked at the guys and he got up and he ran.

"He started running towards the rental car and that's when ... that's the last time I saw him alive."

"He was running and then all I could hear was like bang, bang, bang."

"That was it, that was it for my husband."

She said she got up and went towards him but was shot again.

"I remember thinking to myself 'idiot, fall, if you don't fall they're going to keep shooting at you'."

Eventually she said her leg gave way and her head smacked on the ground.

"I just lay there, my life flashed before my eyes and this voice in my head said 'just stay still'.

The men departed in their car, and Mrs Tu'uheava's cries to her husband were met with silence.

"I started praying and I could feel and smell the blood from my head and from my arm and at that point I thought 'am I just going to lie here and bleed out and die, or am I going to try get help'."

She said she was able to drag herself closer to the side of the road where motorists could see her.

Later a motorist stopped and called emergency services, and she was taken to hospital.