About a dozen houses in a Northland settlement have been damaged by a tornado this morning. 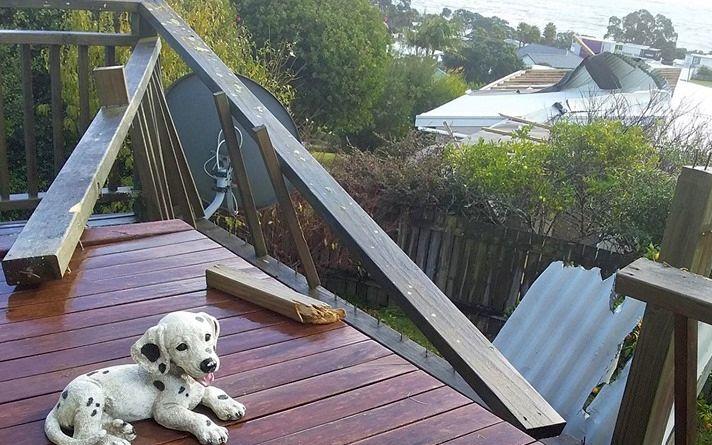 A Fire and Emergency spokesperson said 10-12 houses in the Cooper's Beach area have been damaged, with some roofs lifted by a tornado this morning.

Emergency services were alerted just after 10.30am, and say there are no reports of serious injuries.

Fire and Emergency shift manager Daniel Nicholson said two crews were there and another from Whangārei was on the way.

"They're investigating the area and the extent of the damage. We haven't had any other reports in the surrounding area of any damaged caused by it."

Coopers Beach residents said it was a very frightening experience. A motel worker described ducking inside to escape the wind which he thought was about 70 to 80 knots.

Bowling club president Jim Nayler said the tornado seemed to go on for about 30 seconds and he feared the roof might be torn off.

MetService said a band of heavy rain with embedded thunderstorms was moving southeastwards over Northland and should reach Auckland this afternoon.

Earlier, MetService warned some thunderstorms could bring damaging winds with gusts greater than 110 km/h and there was also a risk of a damaging tornado.

Wind gusts of this strength can damage trees and power lines and and may make driving hazardous, MetService said.

MetService forecaster Amy Rossiter said there was some uncertainty about the path of the low pressure system and where exactly will be most affected.

"But most of the North Island will get some sort of rain or heavy winds associated with it," she said.

Wind Warning for #Auckland tomorrow is for gale northeasterlies from 8am to 2pm. See how this model develops the winds (and rain) in the morning, before suddenly turning northwest. Expect strong southwesterlies later tomorrow too. https://t.co/qHyE5zhh6X ^TA pic.twitter.com/CIOcrkp2RW

Please take extra care on the roads with bad weather expected today. Remember to slow down, keep your lights on, increase your following distance and allow extra time. #Drive2Conditions ^TPhttps://t.co/85bqgJUfs1

The low pressure system is due to bring heavy downpours to many parts of the North Island and the far north of the South Island.

As it moved to the east of the North Island later in the day, strong cold southerly winds are forecast to spread north across central and northern New Zealand, with heavy snow possible above 500m for eastern Marlborough.

Lake Pukaki was the coldest place in the South Island overnight, MetService said.

Forecaster Lisa Murray said there was currently an orange warning in place - meaning strong wind warnings out for the Marlborough Sounds and Wellington which could expect southerly gales from this afternoon.

"We're looking up to about 1am on Thursday, wherefrom the this afternoon we could see some severe southerly gales gusting 120km/h in exposed places."