An elderly bus driver who hit and killed two men in South Auckland has been sentenced to community work. 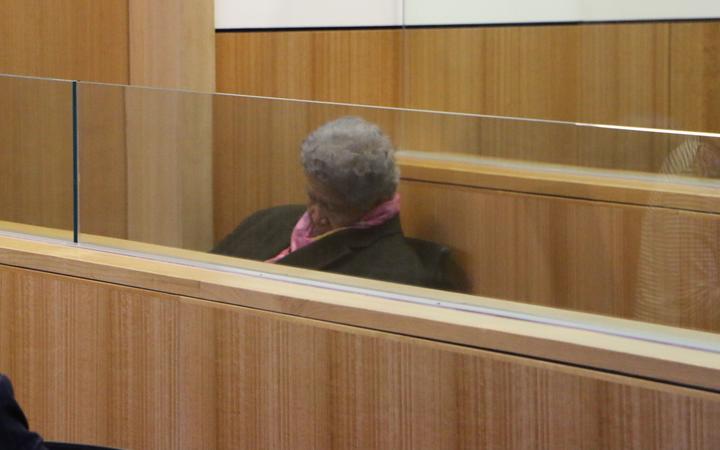 She was behind the wheel of a bus that hit and killed Jeremy Kaukasi, 34, and Taylor Charles King, 23, in Papatoetoe on 14 April 2018.

The friends had just picked up dinner from Choice Takeaways before walking through a carpark to a marked pedestrian crossing at the intersection of Wyllie and Puhinui roads.

As the green man signalled they stepped out onto the crossing before being hit by a bus as Tapora turned into Puhinui Rd.

Both men sustained serious injuries during the crash and died at the scene.

Crown prosecutor Abhiram Guda told the court the defendant didn't apply the brakes or attempt to stop immediately; pulling the bus over 80m down the road.

The families of the deceased, who packed the public gallery to standing capacity, shed tears as Mr Guda said the noises could be heard as the deceased men were run over by both the front and rear tyres.

This morning's hearing began with a prayer, read out by the family's pastor, before Judge Soana Moala addressed the families directly.

"I know that you have suffered and I know that you will continue to suffer. You have waited a year for this day and I know you want justice but I cannot give you what you really want. Nothing that happens today can bring back Jeremy or Taylor."

"I already know that any sentence I impose today will be offensive to you, given your loss and pain, and I am sorry for that."

Judge Moala cried as 11 victim impact statements were read aloud to the court by family members or representatives, later saying it was "harrowing" to hear of their pain and loss.

Tumai Kaukasi, Jeremy's mother, told the court about receiving a call "no parent should ever have to receive" that night.

"I couldn't breathe, I couldn't stand and I didn't want to believe it. My life at that moment came to a halt."

She spoke of the "cruel reality" of seeing her son's body lying on the road, of trying to return to her job two weeks later and her struggle to resume a normal life after her son's death.

"I wish I could tell my son I love him one more time. I wish I can get just one more hug. I had no idea out last phone call would be the last. His life meant a lot to many people.

"He had a big personality, he was generous and helpful, he was very friendly, his laughter was like no other. He always had a smile from ear to ear. It was contagious."

Desmond Kaukasi, Jeremy's nephew, wrote a statement that was read out by his mother Joelene.

The 13-year-old wrote Jeremy was his best friend and would drop him at school everyday, cheer him on at sports games and keep his secrets.

"Seeing him lay there on the road that night is what I always see. I have flashbacks. I'm in a dark hole and I can't get out of it. I sing songs to connect to my uncle because I know he's listening."

He said his new friends were depression and anxiety and he often thought about joining Mr Kaukasi.

Leanne King, Taylor's mother, told the court the day her son died was the hardest day of her life.

"I wasn't ready to let you go out of my life. I have missed you every single day. Since you left me it's not the same at home without you anymore. Everyone's life has changed so much without you. Why did it have to be you? You were only 23. You had so much life to live.

"I have so much anger and hate towards the bus driver. I want her to know and understand what she took from your mum, sister and brothers. I miss your laugh and I miss you hugs every day. I would do anything to have you back in my arms today."

The Crown sought a sentence of three months' imprisonment, the most restrictive sentence outcome, to reflect the seriousness of Tapora's offending.

Tapora's defence lawyer Karl Trotter said his client maintained she thought the traffic light was green and didn't see the men on the pedestrian crossing.

He said his client had lived a hardworking, respectful and selfless life and the accident had impacted her greatly.

Judge Moala said the two young men were entitled to feel safe when they stepped onto the road and said Tapora's failure to stop had further traumatised the families.

However, she believed the woman didn't realise the gravity of the situation and would have stopped if she did.

She sentenced her to 260 hours of community work, disqualified her from driving for two years and ordered she pay $4000 to each of the families.