The Australian teenager who smashed an egg onto the head of Fraser Anning says he has donated more than $100,000 to the survivors of the Christchurch terrorist attack. 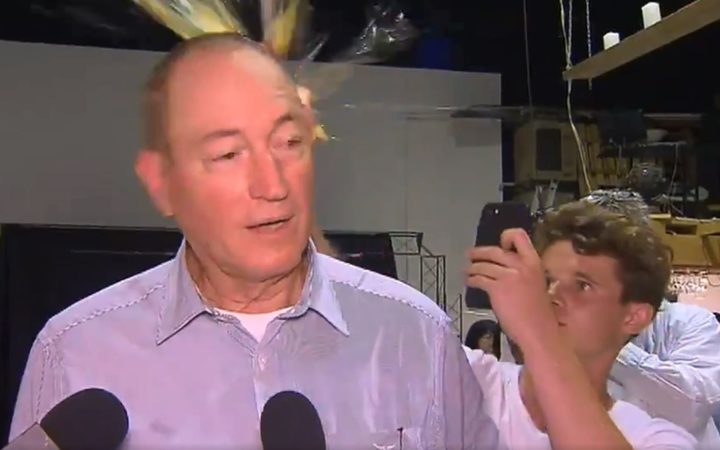 Will Connolly, whose act gained him the nickname Egg Boy on social media, said the money was raised through crowdfunding to cover his legal fees after he egged Mr Anning at a 16 March rally in Melbourne.

Footage of the incident showed Mr Connolly watching Mr Anning from the sidelines before he started filming with his mobile phone, and then smashing the egg on the back of the former senator's head.

The former senator, Mr Anning, was internationally criticised after he blamed the 15 March attacks on two mosques in Christchurch, in which 51 people were killed by an Australian gunman, on "Muslim migration".

He was censured by the Senate for his statement and investigated by police, but refused to apologise.

Mr Connolly had promised to donate the money after he was represented pro-bono and said he had overcome "a huge amount of red tape" to gift $A99,922.36 ($105,761.52) to the Christchurch Foundation and Victim Support.

"I decided to donate all monies to help provide some relief to the victims of the massacre, it wasn't mine to keep," he wrote on Instagram.

"To the victims of this tragedy, I wholeheartedly hope that this can bring some relief to you.

A spokesman for Victim Support confirmed a portion of Mr Connolly's donation had been transferred to the charity from GoFundMe.

Will Connolly's lawyer Peter Gordon said the teenager's family was very proud of him.

He said he worked pro-bono on the case which meant the money raised through the Go Fund Me pages were not needed.

"He didn't need it for legal expenses and he didn't want to use it for any personal benefit so he felt the right thing to do was to have it go to the victims of the Christchurch tragedy."

"It's taken a few weeks to get it all assembled through the Go Fund Me page but it's now been done and so the family all very thrilled and it's a very happy ending to quite a strange tale".

Mr Connolly was embarassed by the all the attention, Mr Gordon said, and believed the focus on him had taken some away from the mosque tragedies.

"I'm not sure how much he's ever going to be a normal high school student again for the rest of his high school days. He's attracted an enormous following of hundreds of thousands of followers on his Instagram account because a lot of people in Australia and New Zealand and around the world admire the courage, fortitude and compassion of a young man who was moved by the injustices he saw going on. I think his life has changed forever."

Christchurch Foundation chief executive Amy Carter said the money was being equally divided between her organisation and Victim Support.

She said it was a signficant donation among the many they had received.

"He's a young man and it shows some incredible maturity to pass this amount of money on but we've received some incredible gifts. For example, collectively the banks of New Zealand have transactioned over $1 million to us so we've had some really big donations come through as well. We've also had donations of 50c from kids' pocket money".

Amy Carter said the Foundation would be working with the Muslim community in Christchurch to look at how all the donations it had received could be used to help people in the mid to long term.

Mr Connolly said he egged Mr Anning because of this statement but conceded it was "not the right thing to do".

The Melbourne teen was given an official caution by police, while officers determined Mr Anning had acted in self-defence when he punched Mr Connolly after the egging.

A 20-year-old Melbourne man was charged with kicking Mr Connolly while he was being restrained by Mr Anning's supporters.