An Auckland gang headquarters was sprayed with bullets early this morning, the latest in a spate of gun violence in the city. 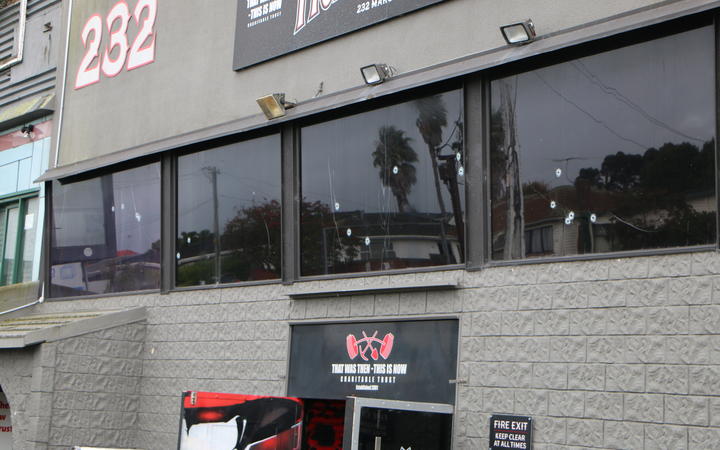 Bullet holes can be seen in the windows of Fight Club, a Head Hunters base. Photo: RNZ

Residents near to the Fight Club gym on Marua Rd in Mt Wellington say they heard a car screeching off after a rally of gunfire.

Eighteen bullet holes were visible in the blacked-out windows of the boxing gym and gang hangout.

Car loads of patched Head Hunters came and went, refusing to speak with RNZ and saying to stop taking photographs.

A family who lives nearby heard the commotion early this morning.

"Around maybe past 4am I'd just been to the toilet then went back to bed and then I heard some gunshots," a woman said.

"I can't remember how many rounds of gunshots, at least 10. It's like an automatic gun shot."

A man said he heard a car driving fast a few seconds later, and a helicopter a few minutes after that.

They've never had any issues with the Head Hunters before, who they say keep to themselves.

"It's a little bit scary because we really don't know what's happening outside, if there is like somebody still with a gun outside or what," the woman said.

"It's never happened in this neighbourhood before."

There have been more than a dozen shootings in the last year and three people have been shot dead over the last month - the latest being a 21-year-old man in Otahuhu last Saturday.

And on the other side of Mt Wellington, the head of the Killer Beez gang, Josh Masters, was shot down outside a motorcycle shop in April.

Manukau Ward councillor Alf Filipaina was shocked and saddened to hear of even more gun violence.

"I mean, I don't know what the gangs are thinking, whether it's internal or whether it's with from other gangs. Jeez, it's shocking."