A man who killed a Hawke's Bay boy 20 years ago has admitted more crimes. 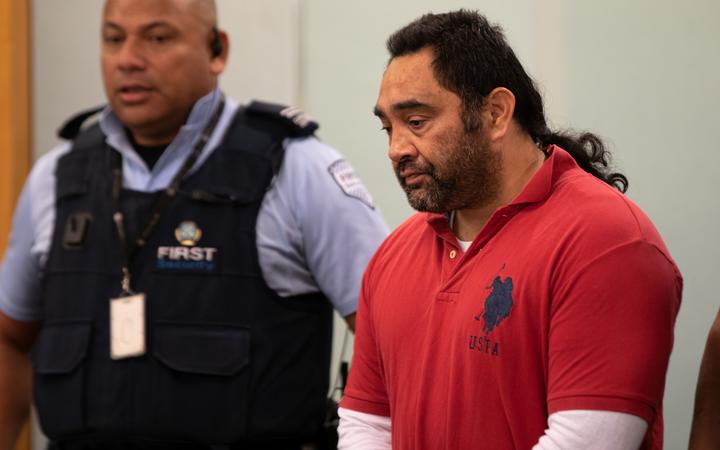 Benny Haerewa in court where he pleaded guilty to 11 charges of violent offending between 2015 and 2017. Photo: RNZ / Dan Cook

Benny Haerewa was freed from jail in 2010 after completing a 12-year sentence for the manslaughter of 4-year-old James Whakaruru.

The Hawke's Bay boy died from extensive internal injuries in April 1999 after prolonged beatings from Haerewa, his mother's partner.

At the time, the Parole Board expressed grave fears about Haerewa's likelihood of reoffending but, having served his full sentence, he had to be freed.

This morning, Haerewa appeared in the High Court at Auckland where he pleaded guilty to 11 violence and sexual violence charges committed between 2015 and 2017.

The charges include threatening to kill, assault with intent to injure asasult with a weapon and sexual violation by unlawful sexual connection.

The court heard he slammed a tomahawk next to a woman on a bed and, on a separate occasion, wrapped an extension cord around her neck.

He also slapped and smacked a child's head and threw a can at them on their birthday.

During this morning's brief hearing, Haerewa appeared wearing a red t-shirt over a white long sleeve; his hair cut short with a low ponytail.

He entered guilty pleas to the charges as each were read to him.

His lawyer Jenny Verry successfully requested a later sentencing date to obtain a report from a private psychologist who had previously worked with Haerewa.

Crown prosecutor Sam Teppett said the Crown would be seeking a sentence of preventive detention at sentencing.

Justice Walker convicted Haerwea and remanded him in custody for sentencing on 18 October.

"People get out and if we haven't changed them they will go on to perpetrate again. So when it happens - and this is a terrible example of it - it is just a waste of all of our resources and time. It doesn't honour James' memory; his death should mean something."

The Office of the Children's Commission drew up a report into James' life and death, saying it was an indictment on society that he was known to many but died.

"It was something that bought this issue increasingly to a head. I think all New Zealanders need no convincing that this is now, in a sense, something that is a roll of shame for this country."