A Whangārei toddler with rotten teeth and a painful abscess was sent home to wait it out for five months with painkillers and antibiotics because of a huge waiting list for treatment. 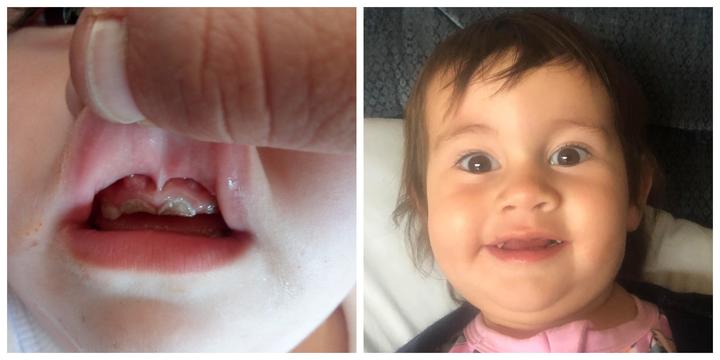 Ivy Dyas has a condition where her teeth are susceptible to decay, but the toddler has to wait months for treatment. Photo: Supplied

And Ivy Dyas's case is not unusual, with long waiting lists for children across much of the country.

In Auckland alone, the number of children waiting to see a specialist or to have surgery for mostly serious dental problems had grown 200 to 2700 since the end of last year.

Ivy's mother, Tari Williams, said her almost 2-year-old had been in pain every day even if she could not express it in words.

"Sometimes she'll cry when she puts certain things in her mouth or if she doesn't place it right and bites [it will hurt].

Ivy has a condition which means her teeth are susceptible to decay.

Ms Williams took her to the dental nurse three times last year before being referred to a hospital specialist but was told it would be at least a five month wait for treatment.

Her teeth were already rotten and, that day, developed an abscess.

They told Ms Williams to treat Ivy with paracetamol, and if Ivy got abscess to use antibiotics.

Ms Williams said after trying hospitals in Auckland, which were just as stretched, Ms Williams decided to seek private treatment in Auckland which cost $4700, something she could only do because Ivy's grandad paid.

She worried about children whose families did not have that option.

"How are these kids meant to go to school and learn, meant to function daily when they're walking round in pain and with infection?"

Last week, Ivy finally had treatment at Kidz Teeth in Auckland, going under general anaesthetic to have her front four teeth removed and caps put on her molars.

Ms Williams said Ivy was a bit tentative after her surgery.

Kidz Teeth specialist paediatric dentist Nina Vasan said like many children on the waiting list, Ivy's treatment was more drastic because the long wait meant her teeth had become worse.

Sometimes the situation was so bad children would end up in the emergency department, Ms Vasan said.

"It's what we call a snatch list. About fifteen kids in a morning session just coming in to have one or two teeth pulled out."

Northland DHB said its dentists would see a child in serious pain from rotting teeth within 24 hours.

DHB oral advisor Neil Croucher says parents are told to call back if pain is too bad and the child will be seen within a day.

Dr Croucher said every year Northland DHB operates on 400 children aged two to six who with tooth decay, and the average wait-time for surgery is four months.

That did not include the wait to see a specialist in the first place.

Auckland Regional Hospital and Specialist Dentistry service said it was facing increasing pressure from the growing population and was working on solutions including weekend clinics and more resources.