In less than a week, more than 4000 people have signed a petition asking MPs to remove abortion from the Crimes Act. 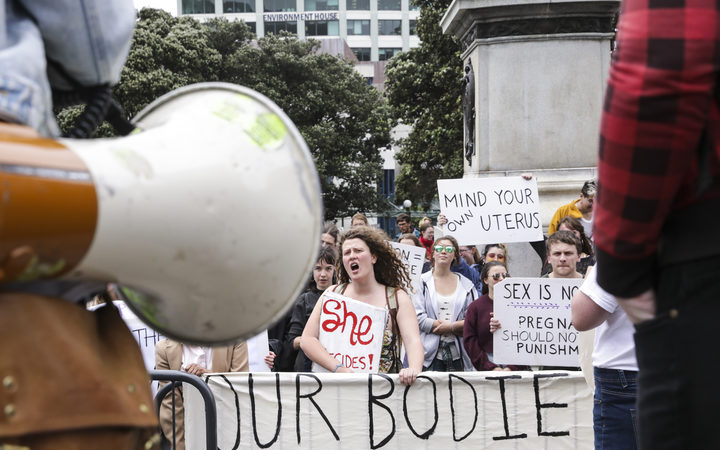 A protest against abortion being a crime, in Wellington last December. Photo: RNZ / Rebekah Parsons-King

The petition, posted on the Parliament website less than a week ago, asks "that the House of Representatives take the abortion out of the Crimes Act 1961 so that abortion is not considered a crime in New Zealand".

At present, it is illegal to have an abortion unless the procedure is approved by two specialist doctors, called certifying consultants.

Rape may be taken into account when considering grounds for abortion, but is not on its own a legal ground.

A recent report by the Law Commission to the government recommended removing it from the Crimes Act. There are three alternative approaches on the table for MPs to consider - one is that the decision is for a pregnant person and their doctor to decide, another is that a mental health assessment is carried out for all abortions, and the third would only require a woman's mental health being examined after 22 weeks of pregnancy.

In March, Justice Minister Andrew Little said he hoped to have a decision from Cabinet about which recommendation to follow "in the next three to four weeks".

"I can't give precise dates. There's very active discussions going on between the governing parties at the moment. There's some side-line discussions with some MPs in the Opposition," Mr Little said.

In December, about 300 protesters marched to Parliament calling on MPs to vote in favour of decriminalising abortion.

And in the United States last week, Alabama's Republican governor signed the most stringent abortion legislation in the US, making performing an abortion a felony in nearly all cases - including rape and incest.