United Nations Secretary-General Antonio Guterres has paid his respects to the victims of the Christchurch terror attacks. 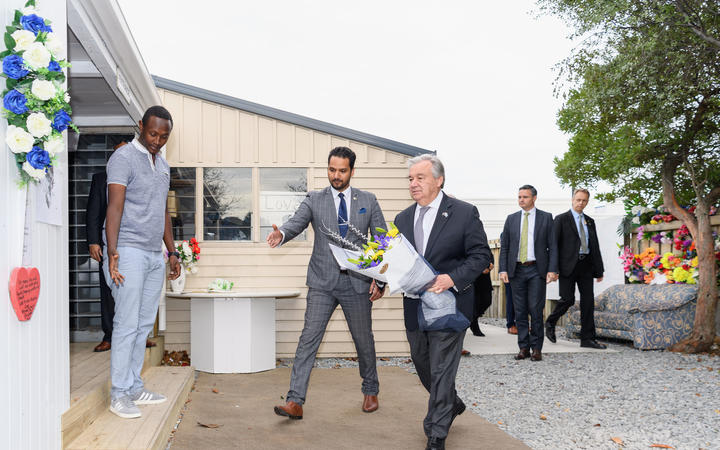 United Nations Secretary-General Antonio Guterres lays a floral tribute to those who were killed at the March 15 mosque terror attacks. Photo: Getty

Mr Guterres laid a wreath at Linwood Mosque in the east of the city this morning where seven people were gunned down during Friday prayer on 15 March.

Earlier today, he visited Al Noor Masjid where 44 Muslims were shot dead in what was New Zealand's worst-ever terror attack.

He spoke of the need to extinguish Islamaphobic behaviour, and the kind of hate speech which fuelled the attacks.

Mr Guterres also thanked the Muslim community for being welcoming him and said at these trying times, the world was with them, the United Nations was with them and he was with them.

A 28-year-old Australian national has been charged with the murders. He is due back in court next month.

Mr Guterres was greeted at the Linwood Masjid by Islamic centre trustee Faisal Sayed who survived the mass shooting.

After laying his wreath at the wall of the repainted masjid, and pausing to take in messages of support for the local Muslim community, Mr Guterres removed his shoes and went inside the mosque.

He spent more than 15 minutes talking to members of the congregation, including hero from the Linwood attack, Abdul Aziz who chased the gunman and threw an Eftpos machine at him as he fled.

There was a heavy armed police and security detail presence for the visit.

After he left in his motorcade, Mr Sayed said he was grateful that the high-profile official had spent time with them.

"It was extremely special, not just for myself, but for the greater community and the Muslim community. It just means that we matter," he said.

Mr Sayed said the visit sends a strong message of solidarity which is very welcomed by his "wounded" congregation.

"It definitely helps in the healing process," he said.

The Secretary-General was curious to listen to their stories, Mr Sayed said.

It was reassuring to have him visit, he said.

"It means a lot to us. It passes a great message that evil will never take over goodness," Mr Sayed said.