Pupils and parents of a Southland school are organising a protest for next week after a second video circulated social media today showing assaults involving children from the school. 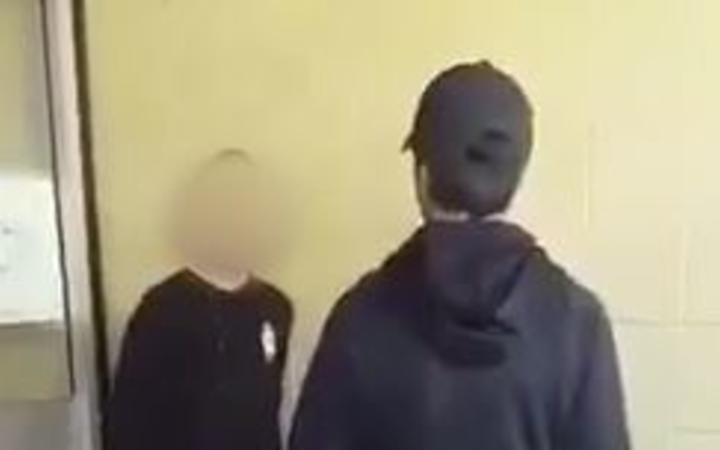 A screen grab taken from footage of a fight at Aurora College in Invercargill. Photo: Supplied

The video was apparently taken at Aurora College in Invercargill last term, but has come to light today after being posted on the Anonymous Team Facebook page.

In it a teenage boy - apparently 14-years-old - is backed into a corner and with his hands down.

He tells his attacker he will not fight him.

The attacker - apparently also a young teenager - then throws punches and kicks at his defenceless victim.

According to a Southland mother who knows the victim, the assault occurred at Aurora College late last term and despite the incident being raised with the school, nothing was done.

"He told me that it was brought forward to the school and the principal and that pretty much he was pulled into the office that day, that he was told to be quiet about it and that he's to remember he's a new student and there's no point in making a fuss," the woman said.

The young victim was a recent addition to the roll at Aurora College after being expelled from his previous school, she said.

But it was quite apparent from the video that he was trying his best to de-escalate the situation and was not the aggressor.

The incident took place on the school's grounds, the woman said.

The release of the video on social media followed the circulation last week of a similar video portraying teenagers attacking Aurora College pupils on a street close to the school.

The Southland woman said the attacker involved in the video released today was the same boy featured in last week's video.

There was something of a fight club culture at the school, with the boy from the two videos heavily involved, she said.

"It's pretty random. It's not a specific student, it's not like they target certain students, they pretty much randomly pick them from what several students have told me. And then their aim is to get as many ... views on social media [as they can] and then they become the kingpin."

The young victim was angry and felt let down by authorities, she said.

The school's principal, Robyn Hickman, later confirmed the assailant in the video was the same boy from another video of fighting which came to light last week. She said the boy was suspended as a result of the assaults and was excluded from the school on Monday.

Police said they were not aware of the matter.

"Police have not received a complaint regarding a second video of an assault at a Southern District school," a statement said.

"However, police will investigate should a complaint or information be received, and we encourage the victim to come forward and speak with police, and anyone who has information should come forward.

"Additionally police encourage people not to share either video and cause further harm to those involved. Anyone making recordings of this nature should be aware that they may also face investigation.

But those responsible for the Facebook page which highlighted said they were taking action into their own hands because of the inaction of the school and the police.

"The incidents came to our attention after parents of the victims reached out to us after the New Zealand Police and the school involved declined to take action," a pre-recorded response from the group said.

"We have called a protest in response. The victims need a voice and up to this point have not been heard."

Ministry of Education's deputy secretary, sector of enablement and support, Katrina Casey, said: "All students deserve to feel safe at school. We take any threats of violence very seriously, as do all schools, and most schools have clear policies and procedures in place to manage this type of unacceptable behaviour.

"We have been in contact with Aurora College and are available to provide support and guidance if needed. The college takes the safety of its students seriously, and is dealing with this issue. We are confident that this is being managed appropriately by the Board. It is inappropriate for us to comment further in relation to matters being investigated by the police or before the Courts.

"We would encourage people to raise any concerns they have with the Police and not to share any video which might cause further harm to those involved."

The Anonymous Team group was calling on pupils and parents to don Guy Fawkes masks - similar to those seen in other protests around the world - and protest the school's lack of action next Friday.

The group said it hoped other schools around the country would join them in taking a stand against bullying.

"It is in hope that taking a day of action will bring attention to the overall failing of the authorities in New Zealand in their duties to protect and care for our children whilst they are in school," the group said.

Two teenagers have been arrested and are facing Youth Court in relation to the video circulated online last week.