Many Auckland dog owners are furious about the tighter restrictions they'd face if proposed changes to dog walking rules get the go ahead. 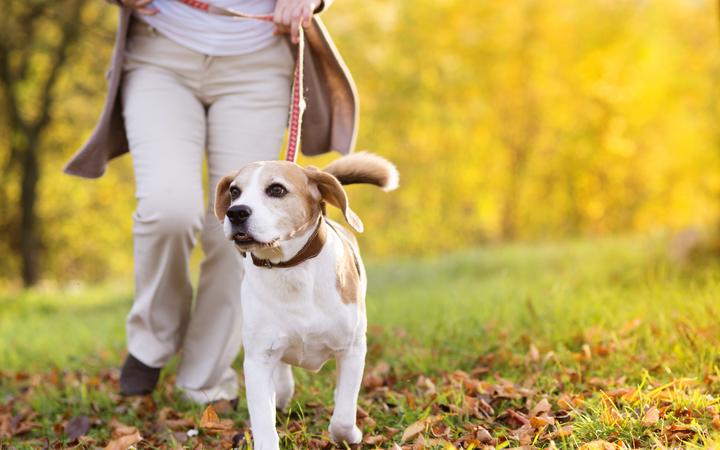 The rules for walking your dog in some Auckland areas could soon change. Photo: 123rf

The public have until next Friday to have their say on the changes, which include extending the times when dogs are banned from certain parks and beaches, and extending access restrictions at four more regional parks.

On her daily walk with Gus in the dog-friendly Grey Lynn Park, Helen Quinn said the current rules were strict enough as it is.

"I think if you're a responsible dog owner, you should be able to manage it without being policed," she said, adding that she does feel a little policed as it is.

Another dog owner, Julian Light, feels more than a little policed and questions why dogs are more tightly regulated than Lime Scooters.

And while Auckland paints itself as one of the world's most liveable cities, Mr Light said it was becoming one of the unfriendliest for our canine companions.

"Last year there were really positive noises from the council. But they've produced a 106-page report, which includes a raft of changes to the bylaws, and not one of them is allowing the city to be more dog-friendly. It's really imposing a whole lot more restrictions on responsible dog owners."

He said we should be having debates about whether dogs should be allowed on public transport - like in other metropolitan centres - or accompany their owners into restaurants without inspectors screaming health and safety.

Mr Light launched a petition last week calling for more dog-friendly rules for the city and over 2500 people have already signed.

"Most dog owners and most dogs are pretty friendly and happy and keep to themselves. I don't know why the council suddenly feels it's necessary to impose more rules and restrictions on a law-abiding population."

The proposed changes include extending the "time and season" rules, in which dogs are banned from places during busy periods.

These would change from 10am-5pm to 10am-7pm, and instead of starting on Labour Weekend and ending on 1 March, bans would last until the 31st.

In order to protect wildlife, it would also ban dogs, on or off a leash, in parts of Glenfern Sanctuary and the regional parks at Muriwai, Whatipu and Long Bay. Parts of these parks are already subject to a ban.

The council has so far received over 3500 submissions.

Regulatory Committee chairperson Linda Cooper said the main aims of the proposed changes were to better communicate existing rules, to see more consistency across the region, as well as improving dog management.

Local boards have been able to set their own rules for their areas and as such it's become very confusing.

"So there's about 17 local boards that actually reduced the hours. The effect of that was it became very inconsistent across the region and it was very hard to communicate on the website what the hours were from local board area to local board area."

For Hibiscus and Bays Local Board chair Julia Parfitt, each local board area has its own unique requirements and should be allowed to set the rules.

"I know that there is an argument that you should have consistency. And if council had originally felt that consistency was required, they should never have asked local boards to develop their own bylaws.

"But, you know, most people understand that there's different variances for different reasons. [For example], Waiheke has a large resident population over summer but not winter and that reflects in their bylaw."

A council spokesperson said the proposed changes would in fact liberalise many aspects of dog ownership. For example, a dog previously deemed to be menacing could take an obedience course and - with no further infringements in a one year period - the owner can request the classification be reassessed.

She said the proposed policy clearly lists the more than 1000 identified off-leash parks and reserves across Auckland, making it easier for dog owners to find nearby places their dogs can run off-leash.

The public have until May 10 to make submissions on the proposed changes.