A 41-year-old man is in custody after part of a Wellington central city street was closed due to a threat made on a bus. 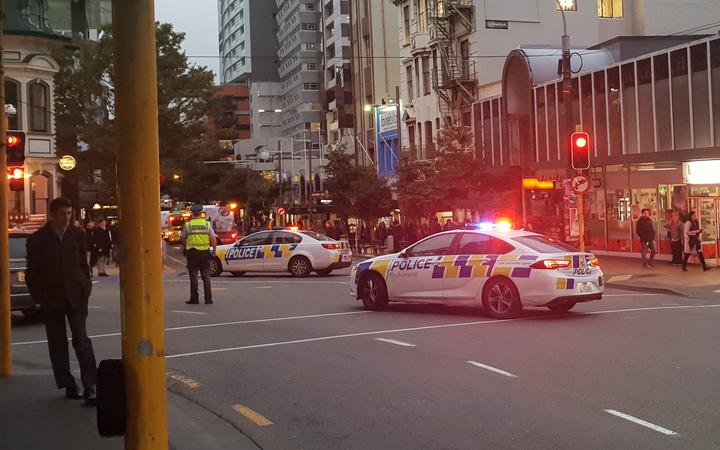 Willis St in Wellington was closed after a threat on a bus. Photo: RNZ

The man has been charged in relation to an outstanding warrant and will appear in court tomorrow.

Willis Street was cordoned off between Lambton Quay and Mercer Street after police received a call reporting the incident at about 5.20pm.

Shortly after the alarm was raised, Wellington City Council media spokesperson Richard MacLean said there was confusion in some central city streets because of the threat response.

"There's a lot of chaos going because the buses are being trapped, and people are stuck. There's quite a lot of gridlock going on," said Mr MacLean.

"There's clearly something very serious happening. Lots of people are having to take detours."

Police tape was blocking both ends of the street, and people and vehicles were being diverted, he said.

A woman who was on the bus said she was on the top deck of the double decker when she heard a commotion down below.

She said she could hear yelling and a noise that sounded like someone had fallen over.

"The yelling got louder and there were pushing sounds, and I could hear lots of people getting off the bus, then the bus lights went out and the lighting went out."

The woman, who did not want to be named, said she went downstairs and was told by another passenger that the man had said "something silly".

The driver told everyone to get off the bus, and the man continued to yell, saying he was a good person, and not really making sense.

The man was yelling and seemed to be drunk, and possibly mentally unwell. He was someone she recognised as living on the streets.

"The guy was just yelling, sounding really incoherent. Going 'don't look at me ... you don't want to see what happens when this goes'."

While the bus driver was "quite distressed", both he and the police did an excellent job at dealing with the incident, the woman said.