A new set of crosses representing fallen First World War soldiers is being delivered to Huntly today after some were intentionally destroyed with a car in Huntly over Easter weekend. 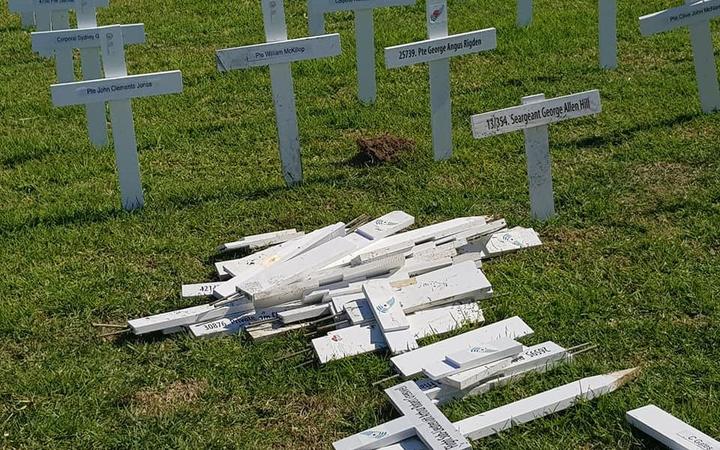 RSA Huntly president Frank McInally told Morning Report the attack over the weekend was devastating for the local community.

"Where it happened is 50 metres away from the road. They drove into the park, lined them up, flattened them, the tyre marks are still there - and then they turned around and come back again."

"It's pretty devastating, the whole town's in an uproar ... [I'm] getting phone calls from the last people you'd even think of offering support and how they can remedy the problem."

Mr McInally said he wanted the culprits tracked down and punished.

A nearby supermarket might have CCTV but was under construction, he said, and a witness had come forward who believed up to five people were in the car.

"Saw a car with four or five people in, under the cover of darkness obviously to do it.

He said some of the crosses were able to be put back up, but about 30 were too damaged.

He had not thought the crosses could be replaced by Anzac Day, because they were individually named and would need to be matched against the database, but Fields of Remembrance Trust has stepped in to help.

Trust vice chair Graham Gibson said new crosses were being sent down today after the "appalling" destruction of the crosses.

"We are busy right now as we speak. My people are putting together a set of crosses and we're endeavouring to get them down to Huntly this afternoon with the poppies - you know, the big long-stemmed poppies that go in front of the crosses.

"We want to make something special for Huntly. The people down there must be devastated."