An Auckland honey company has pleaded guilty to charges of secretly adding a substance to its mānuka honey to boost its value.

It is the first prosecution of its kind over mānuka honey which naturally has antibacterial benefits.

The Ministry for Primary Industries (MPI) has a strict definition for what constitutes mānuka honey, including that nothing is added or removed to the final product.

Evergreen Life Limited admitted it added a synthetic version of a naturally-occurring substance to its mānuka honey products, which would have allowed it to market it as higher-grade and sell it for more money. 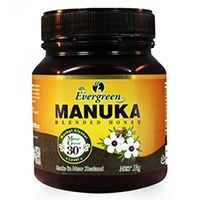 Mānuka honey is lauded for its health benefits, due partly to an omega acid called dihydroxyacetone (DHA) and an antacid MGO.

DHA is present in the nectar of mānuka flowers, which over time turns into MGO when combined with other proteins in the honey. Mānuka honey is rated by the amount of MGO in it - the higher the level, the more valuable the honey is. So a high DHA reading - which Evergreen Life artificially boosted - is valuable, because it indicates a high level of MGO.

In the North Shore District Court, Evergreen Life and a company manager, Jason Lee, pleaded guilty to seven representative charges of selling adulterated honey with intent to deceive for material gain and of selling non-compliant honey.

The director, according to the Companies Office, is Hyung Soo Lee, or Henry, of Murray's Bay, Auckland.

Evergreen Life was forced to recall 18 of its products in 2016. There were initially 71 charges but they were amended to seven representative charges.

The charges were brought by the Ministry for Primary Industries, under the Animal Products Act.

MPI said New Zealand's mānuka honey was a "premium" product internationally, and our reputation rested on the integrity of our products.

New Zealand honey and bee exports are worth $340m and is growing.

All mānuka honey must be tested by an MPI-recognised laboratory to make sure it meets agency's definition, and a grading system, called the Unique Manuka Factor, is applied by an industry association.