Police have released an updated timeline on the mosque attacks, revealing the shooter was still in the area of the Al Noor Mosque when officers arrived, but was hidden by a passing bus. 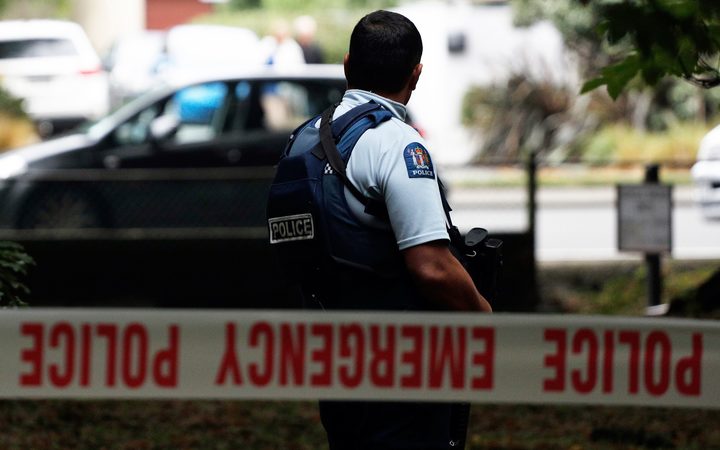 A police officer secures the area in front of the Al Noor Mosque on 15 March. Photo: AFP or licensors

With no prior description of his vehicle, and no information the offender had left the Al Noor Mosque, the Armed Offenders Squad was powerless to stop him as he drove away.

Police Commissioner Mike Bush said the public should have as much information as possible about the response, and the timeline released today provided further clarity.

"I want to emphasise we are still in an investigation phase and now a prosecutorial stage.

"The investigation team continues to be focused on confirming certain details, particularly timings sourced from a number of electronic systems and devices with differing internal clocks. The information released today is currently the best information I have to date and what I can release without compromising the criminal investigation or the trial."

Mr Bush said police staff acted "as quickly as humanly possible given the rapidly unfolding nature of the event, and the information available to us in that very brief period of time".

"I reaffirm my previous comments that police staff acted as quickly as humanly possible given the rapidly unfolding nature of the event, and the information available to us in that very brief period of time," Mr Bush said.

"As part of normal operational practice we are debriefing our response. In order to provide absolute transparency this will be done by an independent team, including a Queen's Counsel.

"The debrief is an important process to ensure any lessons are learnt, and used to inform future operational responses."

Mr Bush said police have begun to transition from the protective security measures that were in place following the attack.

"Generally this means frontline staff will transition back to our normal approach regarding carriage and access to firearms," Mr Bush said.

"You may still see some frontline staff continue to carry firearms on a case by case basis if particular circumstances necessitate this approach.

"We will still maintain our tactical capability to respond to incidents as required, however the public can now expect to see fewer police officers routinely carrying firearms."

"Their specialist skills have been credited with saving lives and we were fortunate to have them on the ground with us."

Police have also released a map of the alleged shooter's movements. 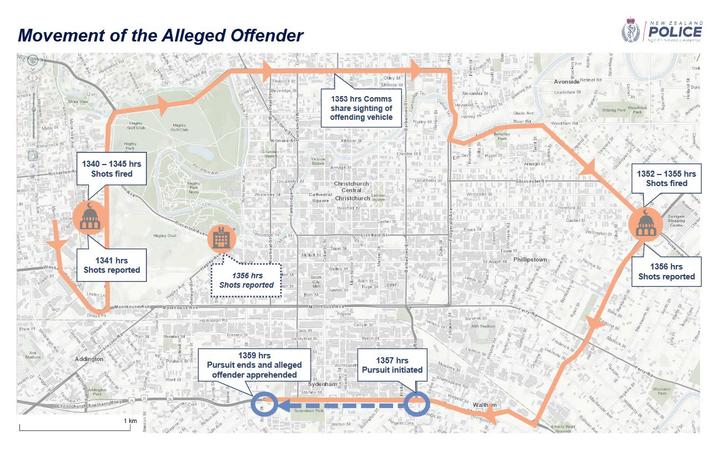 Timeline of the attacks on 15 March

1.43pm: All available units are en-route to Al Noor Mosque.

1.46pm: Armed Offenders Squad members are the first to arrive near the scene. They start approaching the mosque and one member stops to assist a critically wounded victim. At this point the alleged offender is leaving the area, and his vehicle is obscured from the view of these AOS members by a bus. At this time there is no vehicle description, no information an offender has left the mosque, or how many shooters there are.

1.56pm: Police receives information that shots have been fired at Christchurch Hospital's emergency department. It is later confirmed that no shots had been fired at the hospital.

1.56pm: A member of the public flags down a police car to advise shots have been fired in Linwood.

1.57pm: The vehicle is seen by a police unit on Brougham Street and a pursuit is initiated.

1.59pm: The vehicle is stopped and the offender is apprehended. Police also arrive at the Linwood Mosque. 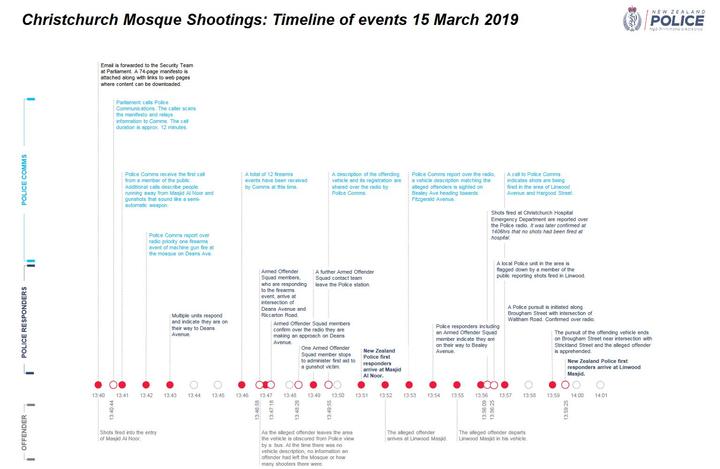