A drug-resistant superbug that kills about one in three of all infected patients, Candida auris will inevitably spread to New Zealand, a public health expert says. 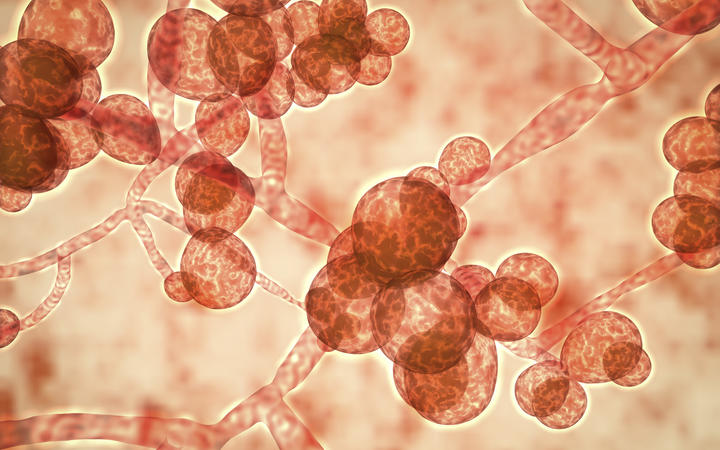 The yeast fungus typically infects people with serious illnesses and weak immune systems, such as the elderly and the very young.

"It was only identified and named 10 years ago and since then it has spread almost globally," he said.

Candida auris can spread to the blood and kills about one in three people who contract it, Prof Baker said, and it thrives in hospitals and is very difficult to eradicate once established.

"Some of the people who go into hospital now may not come out who would otherwise have survived, because of this infection," Prof Baker said.

"Particularly those that are in hospital for treatment, perhaps they're recovering from surgery or from major medical problems. Also, the very young, so premature babies.

He said it would be only a matter of time before Candida auris reaches New Zealand.

"I think it's pretty inevitable, it is going to come here."

"At least half a dozen cases in Australia now, most of whom acquired their infection overseas but it is inevitable that it will appear in New Zealand."

He said New Zealand's infectious disease specialists and microbiologists were working to put controls in place. Infected patients would most likely be isolated, and there will be careful nursing practices put in place to prevent it spreading.

He said the fungus would make it harder for medical staff to care for very ill patients.

"It's transmitted via person to person contact and also contaminates surfaces in hospitals and it's actually very hard to get it out of that environment ... that's another really important reason for handwashing for people going into hospital and people working in hospitals.

"Hospitals can manage these kinds of infections, it just makes it more harmful, more risky for patients. It also makes the stay in hospital longer and far more costly and unfortunately this is what increasing anti-microbial resistance will look like as we go ahead."

"It's got a few other really difficult features; it's hard to diagnose.

"There's just one reference lab in New Zealand - in Auckland Hospital - to do the diagnostic work. Of course they're really good at doing that but it's still a difficult diagnosis so it may take a little while to spec the infection and do the right testing."

Prof Baker said New Zealand had been lax about the increasing resistance to antibiotics.

"Really I think we've been far too complacent about antimicrobial resistance in New Zealand," he said.

"It's going to be a series of really unpleasant surprises, where we can't rely on anti-microbial drugs to work in the same way as they have in the past ... I think we need to get really more proactive. We can't be surprised by these kind of infections.

"This is a much harder bug to disinfect or decontaminate."

In a statement to RNZ, the Ministry of Health said it was aware the number of overseas fungal infection cases had risen.

The biggest risk for New Zealand was from patients who transferred here from overseas hospitals as they may be infected. The fungus could then spread and cause infection in other vulnerable patients.

The ministry said it was working with a range of partners in the human health, animal health and agricultural sectors to minimise this threat of drug resistant superbugs.