The transformational power of music has been demonstrated with a collaboration between the Christchurch Symphony Orchestra and inmates in the pre-release unit at the city's men's prison. 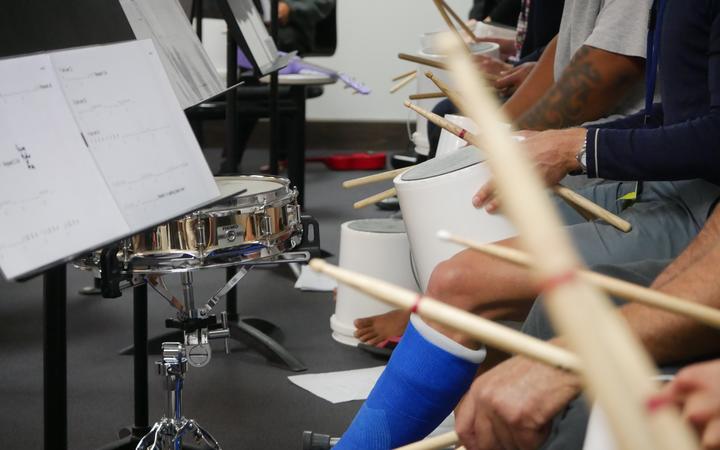 Participants of a music course at Chch men's prison drum on buckets with members of the CSO Photo: Christchurch Symphony Orchestra

Their efforts culminated in a musical performance last Thursday of the four pieces they had written over the eight-week programme.

Carey Ewing from Pathway, the group working to prepare the men for life outside the wire, was amazed that they had been so prolific.

He said prison took a lot from people, including their antisocial behaviours and choices and it was important those things were replaced with something positive that had meaning for the inmates, and music could be a part of that.

"Alongside projects like that, we also do other cultural development, a writers' group, a book club and a raft of other things, alongside really practical reintegration skills and opportunities as well," he said.

"By itself, it probably would have limited value, but incorporated into a whole package, working with individuals and building them up to prepare them for release, we think that providing those opportunities is a key part of returning someone back to our community [as] a well-rounded, well-prepared person."

Mr Ewing said many of those in the music programme found it pushed them beyond their comfort zones and gave them a real sense of achievement and pride in themselves.

"And one of the important things they've learnt is they have the ability to learn something, to gain mastery over something.

"They were able to see that for themselves and have that recognised by their peers and by members of the public and the community.

"They've done something positive and meaningful, that has hope ... and has direction."

He said it was the second time the music programme has been run at the prison and he hoped to do again in the future.

The orchestra members also enjoyed the experience, being able to share something that was important to them and see that being picked up and embraced.

Mr Ewing said the symphony players were also keen to return for another programme in the prison.