A road fatality in Hawke's Bay this morning has taken the road death toll to 12 within the past four days, including a family of five.

Meanwhile, police have named the five family members killed after a crash in Taupō on Monday.

One person died in a crash on State Highway 50 at around 1.20am in Tikokino, Central Hawke's Bay.

A car crashed into a bridge near Glencoe Station Road and Creek Road killing the occupant at the scene.

Last night, a motorcyclist died in a crash in Manawatu after hitting a cow on a rural road. Police were called to Bainesse Road, south-west of Palmerston North about 8.10pm on 3 April.

The cow was euthanised at the scene and no other vehicles were involved in the incident.

On 2 April, one person died following a serious two-car crash on the Te Puke Highway, near Te Puke.

Police were called to the scene at around 5.40pm.

On 1 April, nine people were killed in separate fatal crashes across the country.

In Taupō, five people from the same family died in a crash on Tirohanga Road.

The crash near the Kinleith Forest was reported at about 8.20am on 1 April.

An 11-year-old boy is the sole survivor of the crash.

Police said people in the vehicle were not wearing their seat belts, which led to the deaths.

Students from Rotorua Lakes High School attended by two of the victims - Michelle and Aroha - will be visiting their marae today.

Their classmates, teachers and the wider school community have been invited to the tangi. 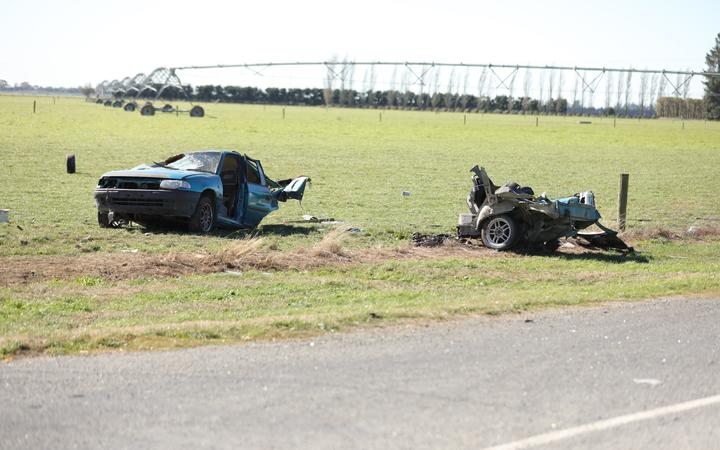 In Ashburton, three people died when a station wagon and a ute collided at the intersection of Mitcham Road and Hepburns Road.

The crash occurred shortly after 10am.

Crash data collated by the Transport Agency since 2000 counts more than 250 crashes on the back roads of Ashburton, with 48 being on Mitcham Road.

On the same day in Auckland, a man died after being critically injured after his car left the road and crashed into the water near Auckland Airport. He had been taken to Middlemore Hospital.

Emergency services were called to the intersection of Tom Pearce Drive and Puhinui Road just after 1am.

Following the fatalities, police are urging road users to drive to the conditions, wear seatbelts, not drive tired or after drinking or taking drugs, and to keep cellphones away.