The Crusaders Super Rugby team has turned to an independent research company as it looks at a possible name and brand change in the wake of the Christchurch mosque attacks. 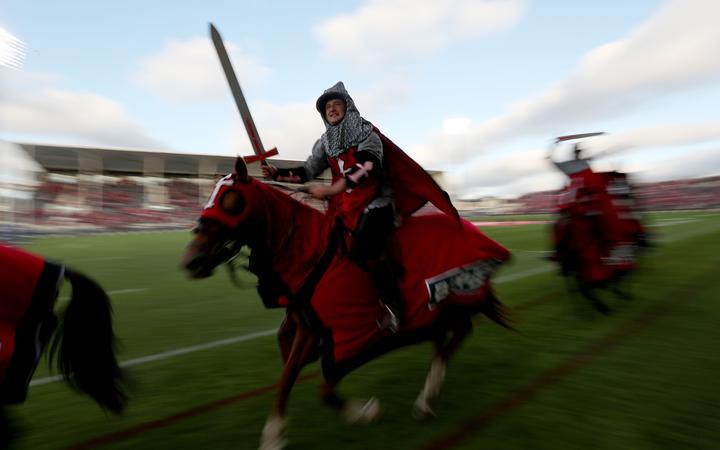 There has been debate over the appropriateness of the Crusaders name following the Christchurch mosque terror attack. The Crusades were a series of religious and political wars between Christians and Muslims fought in the 11th and 13th centuries.

Crusaders chief executive Colin Mansbridge said that in the wake of the terror attacks in Christchurch, the franchise was "treating the question around the appropriateness of our brand extremely seriously".

The Crusaders and New Zealand Rugby (NZR) announced today that they will engage Research First, to seek feedback and provide recommendations on the Crusaders team name and brand.

Mr Mansbridge said in the meantime the sword-wielding horsemen in the pre-match entertainment would be dropped for the rest of the season.

He said the franchise was trying to do the best it could to support the community.

"Our challenge is that the name Crusader has come to mean something quite different to many of the team's supporters. This team is proud of the positive contribution it makes to the community. In recent times the Crusaders region has been through a number of tragic and trying events and the team has played an important role in helping galvanise the community and raise spirits following significant events. Through these events, the Crusaders name has become more reflective of a positive Crusade."

NZR chief executive Steve Tew said it was apparent that the Crusaders name and symbolism was offensive to some in the community.

"One thing that has become very clear in the last two weeks is that there are divided opinions on the best way forward for the brand. We understand and appreciate the passionate feedback that we are receiving on both sides of the conversation, and at this stage we are committed to keeping an open mind until the independent research has been done.

"Maintaining the status quo in terms of the Crusaders name along with the current imagery of knights on horseback is, in our view, no longer tenable because of the association with the religious Crusades that has now been drawn. That is therefore not one of the options that we will be considering."

Research First is to look into two possible options - retaining the 'Crusaders' name but changing the branding and associated imagery; or undertaking a complete rebranding, including the name and all imagery.

Mr Mansbridge said a decision would be made about the name change before the start of the next season.

Minister of Sport and Recreation Grant Robertson said he was staying out of the name change debate and supported the Crusaders consulting with the community.

"This is a decision for New Zealand Rugby and the Crusaders franchise and the people of the region of Canterbury," he said.

"They're very proud of their team and I know that they take seriously the concerns that have been raised."