Garden to Table allows Kiwi kids to grow fruit and vegetables at school and cook nutritious meals for their classmates that they may never touch at home. Keri Welham pulled on her gumboots to see the programme in action. 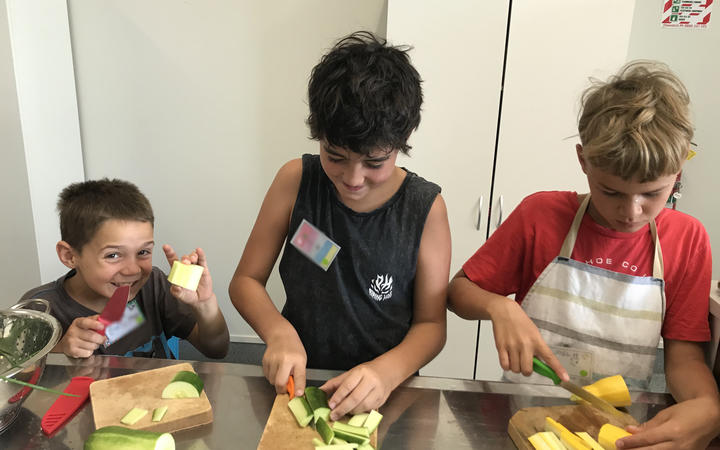 Some of the school children taking part in The Garden to Table programme. Photo: Supplied to RNZ

Garden to Table was piloted at Auckland's East Tamaki and Meadowbank schools in 2009 and is now in 174 nationwide. It was an attempt to educate children in food literacy at a time when it was feared too many Kiwi kids did not understand where their food came from.

Those involved have said the benefits span everything from environmental awareness to better health.

A decade on from the pilot, it is estimated about 10,000 meals are served up every week by kids who, during class time, have grown, harvested and cooked a meal's ingredients.

The year five and six children were making green bean, cucumber and mint salad with avocado and chia.

And the children were not the only ones learning - Ms Rickard was reading about anthocyanin.

"[The] magic thing about beans: When you cook purple beans, they turn what colour? Green! Pretty cool eh?

"And the reason they do that, I had to look this up, it's a chemical called anthocyanin, which is an acid and that's the thing that makes red cabbage red [and] purple beans purple."

The class split into a garden group and a kitchen group. The first task for the garden group was to harvest young and slender beans for the day's meal, and big, fat, dry beans to keep for seeds.

Later, a teacher took the harvested beans, courgettes and mint down to the community hall where the kitchen group were getting their chopping stations prepped.

The beans were dropped in the boiling water and one student, Kate, peered through the rising steam. 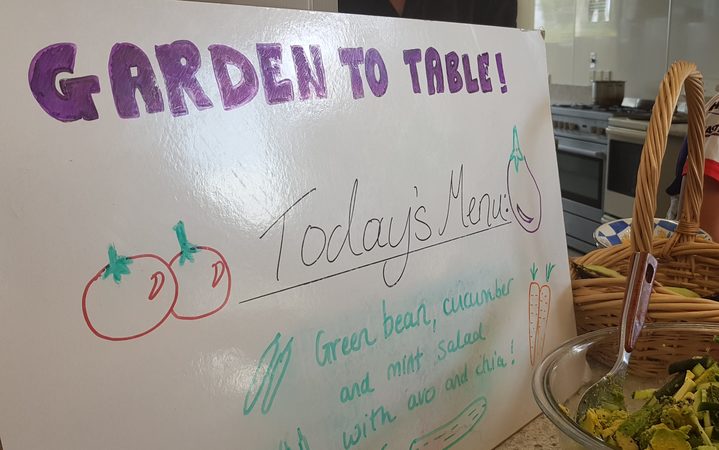 Oropi School will be getting an on-site container kitchen. It will be located alongside the garden and enable the children to work together as one big gardening and cooking group.

Oropi has 328 students and was the first school in the Bay of Plenty to join the programme. The container kitchen will complete a garden that has been several years and many volunteer hours in the making.

The Garden to Table programme started with the middle school but has this year been offered to all children but new entrants. This year it will cost the school $30,000 to run the programme and grow its gardening and cooking resources. It will be funded through parent fundraising, sponsorship, grants and international student fees.

For most students, the programme was their favourite part of the week.

"In fact, we've got one kid in the sick bay who really shouldn't be here, who's come to school because it's Garden to Table day," Mr King said.

The students worked while talking happily. Even if some of the tasks weren't for everyone.

"I'm not touching it," said one student, looking at rotting fruit and vegetables ready for compost.

Joanne Harland is Garden to Table's programme manager. She said the programme had a clear vision of connecting children to the source of food.

"It started because of an awareness that children no longer knew where their food came from and they felt disconnected from it."

But she said the flow-on benefits were many. Children in the programme ate more vegetables, so they were healthier. They developed a consciousness around the environment and seasonality. They learned to nurture living things.

Often children who were not as successful academically could emerge as leaders in the garden and kitchen, Ms Harland said.

Nationally, the programme relies on corporate sponsors and grants to ensure schools only have to pay a portion of the cost. Oropi pays $550 a year for onsite staff training, weekly recipes, support from suppliers and various other resources.

The Garden to Table Trust is about to launch garden parties, where people host their friends at home, charge a small entry fee, and give the money to the trust.

After everything was eaten and the dishes were done, the school children reflected.

"I wish I could make it at home, 'cause it's really good and it's healthy," said one student.

"So yum," said another. "The avocado with the mint - it's so minty - and those beans are so yum."

And as an added bonus, teachers said when children went back in to class after the programme, they were calmer and better able to focus.