At today's National Remembrance Service in Christchurch there were staunch blokes in flannel shirts, mums and babies, school kids in uniform and dreadlocked sandal wearers. All standing together.

About 23,000 people gathered for the remembrance. They showed support and solidarity for the Muslim community. Photo: RNZ / Cole Eastham-Farrelly

It seemed like "surreal" was going to be the word to describe today's national remembrance in Christchurch.

As they entered Hagley Park, in the heart of the Garden City, people were using the word to describe the scene.

Christchurch man Richard Scott got there early to take a spot near the front and said it was surreal being there to remember the dead in a place he associated with concerts like Bryan Adams.

Sergeant John Cassidy, a police officer from Rotorua, said it was surreal being flown down for the day to provide extra staffing and seeing the people - about 23,000 - show up to pay their respects.

They weren't the only ones calling it surreal.

But a woman at the very front of the public area, who didn't want give her name, said surreal didn't cut it.

"I think it's a mix of horror and beauty - although I don't think beauty is quite the right word either. It's the juxtaposition of horribly sad and all the support that has come out of the community."

That contrast has been a common theme since the shootings on 15 March - an utter horror that has brought out the best in many people.

'I couldn't wait to come here and share my grieving'

It was a beautiful Friday dawn in Christchurch.

It was still and clear in Hagley Park. A pink hue on the horizon faded into a greenish tinge then a pale blue sky that hung over the crisp morning.

The speakers set up for the service were broadcasting birds chirping to the whole venue. It didn't seem to be deliberate, just birds hanging out near a microphone somewhere.

In contrast, empty buses formed temporary blockades across nearby streets, swarms of armed police patrolled on foot and in tinted-window four-wheel-drives and the constantly circling helicopter droned above.

Ambulances were on stand-by, crowds of media prepared, sniffer-dogs did the rounds and security stood guard.

The first members of the public started showing up about 8am. People from all walks of life showed up, some from afar.

Mohamad Khazma flew from Sydney for the remembrance.

"I came here to be sharing my grieving with all my brothers and all the sisters in Christchurch. I'm so, so happy that I came and saw all these people guarding and sharing the same greeting…

"I was at work, I was shocked, I was so sad for 14 days. I couldn't wait to come here and share my grieving with everybody, it's so nice to be here."

There were staunch blokes in flannel shirts and jeans with their hands jammed in their pockets. Mums and babies with rugs spread out with snacks at the ready. School kids in uniform. Grandparents, businessmen and women in suits, people in sports gear. Young men clad all in black. The dreadlocked sandal wearers. 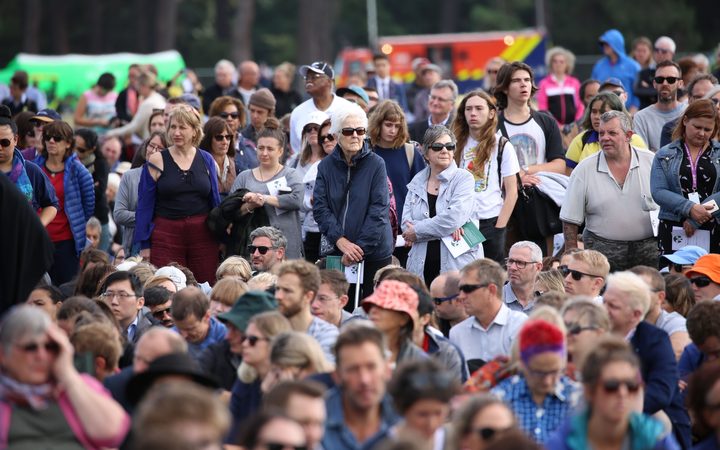 The crowds were subdued before the remembrance began.

In the minutes before the karanga that started the event, the crowd went silent, even as people continued to stream into the venue.

Dr Te Maire Tau from Ngāi Tahu said: "In our custom we allocate a time for our people to grieve and to sit with the spirit of the dead to release their pain.

"We have a saying 'tears avenge death' - but we also understand that there is a world where pain no longer exists, where the soul dies, where it is numb and beyond feeling, and we call this world 'te kore', the world of nothing.

He was followed by Christchurch Mayor Lianne Dalziel who welcomed the crowd, singer Marlon Williams, who performed a waiata, and Shaggaf Khan, the president of the Muslim Association of Canterbury.

"On behalf of the local Muslim community in Christchurch I stand before you today with a mix of feelings. I feel deeply saddened. I'm saddened that when I look for them I can no longer see the beautiful faces of the 50 men and women and children who lived among us only 14 days ago," he said.

"Although our eyes shed tears and our hearts mourn, we know that they are at peace. I feel incredibly humble. I am humbled by the outpouring of grief that you have shared with us."

Mr Khan was followed by easily the most moving speech of the day.

Farid Ahmed survived the attack but his wife was killed by the gunman. He addressed the crowd from his wheelchair. 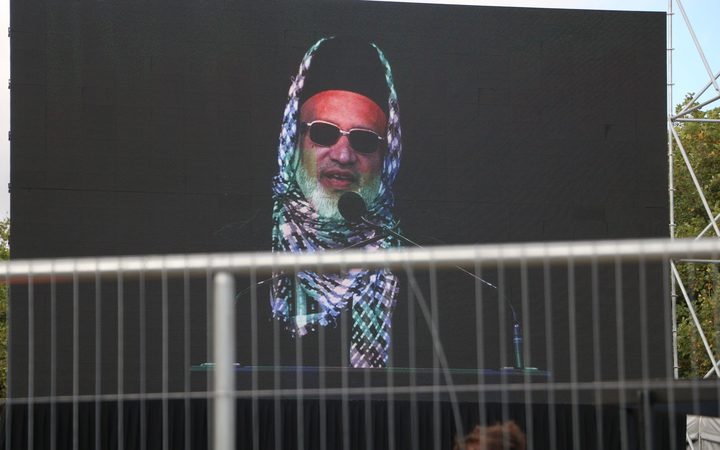 "I don't want to have a heart that is boiling like a volcano. A volcano has anger, fury, rage; it doesn't have peace, it has hatred," Mr Ahmed said.

"It burns itself within and it burns the surroundings. I don't want to have a heart like this and I believe no one does."

He said he forgave and loved the attacker.

"I want a heart that will be full of love and care and full of mercy and will forgive lavishly. This heart doesn't want any more lives to be lost.

"This heart doesn't like that the pain I have gone through ... that any human being should go through that kind of pain. That is why I have chosen peace, I have chosen love and I have forgiven."

He called his wife's killer his brother. When he said he "could not hate anyone", the crowd applauded.

It was an eloquent, beautiful speech. The crowd stood at the end, in awe of his ability to forgive the gunman.

Next, Dr Mustafa Farouk, president of the Federation of Islamic Associations of New Zealand, took the stage.

"We wish to say a sincere thank you for the support compassion and kindness you have shown. We hold onto our solidarity and we never let it go. Aroha, aroha, aroha."

The names of the victims were then read out. It took four minutes.

Heads were bowed and the crowd was silent. Some people were holding hands, others were embracing one another. Tears that had earlier been stifled were now openly shed.

But after tears for the victims, when Yusuf Islam/Cat Stevens took to the stage and started playing "Peace Train", there was a smile on his face - and it made the crowd smile, too. 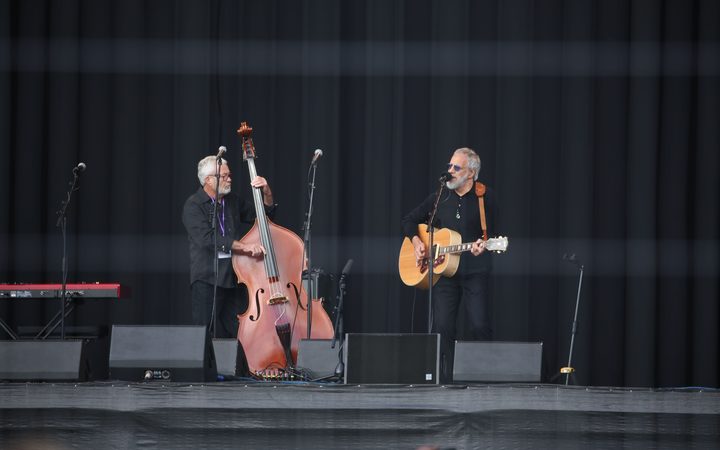 Before he played "Don't Be Shy", he said: "This is really a song that could reflect the wisdom that is, it's only when good people stay sitting that evil rises. We've seen the opposite in this country. May God bless you all."

A Muslim man stood alone in silence wiping away tears during Islam's performance, while others held hands.

Event MC Julian Wilson got the only laughs of the day at the end of Islam's songs, quipping "that was awesome".

Dame Patsy Reddy expressed her condolences to "the widowed, the fatherless, the motherless, the injured, to the bereaved families, the Muslim community and the people of Christchurch".

"The depth of your grief and sorrow is unimaginable. We all shed tears and pain for your loss.

"Silence is not enough, it condones everything from casual acts of racism to violence. We must challenge the hate to be found deep in all of us.

"Evil must not take root and flourish in our land again."

When Prime Minister Jacinda Ardern was announced, the whole crowd leapt to its feet and began applauding. Her handling of the aftermath of the shooting clearly had a large impact on the people of Christchurch.

And her emphatic rejection of racism, violence and extremism was embraced, too.

After the standing ovation for Ms Ardern, the son and brother of the two Syrian refugees killed embraced her. At the end of their hug, there was a glimpse of a reassuring smile on the teenager's face. 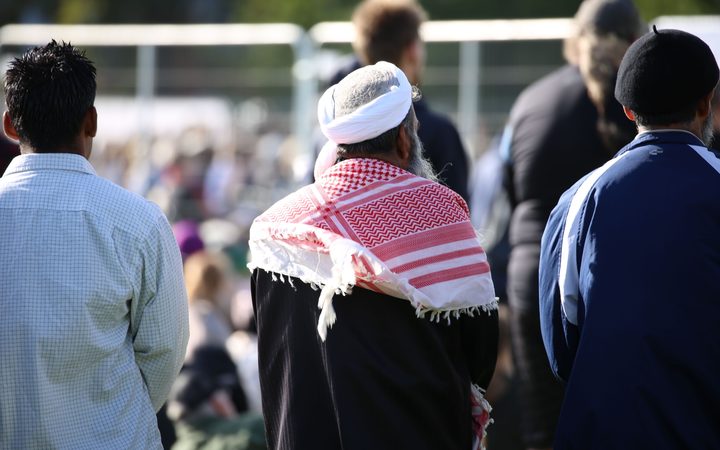 The crowd gathered for the remembrance was large and diverse. Photo: RNZ / Cole Eastham-Farrelly

When the daughter of one of the victims got up on stage, it was a tear-jerker.

She wanted to say a bit about her dad, but the moment seemed too much. Her dad, Ashraf El-Moursy Ragheb was a nice man, she said.

A man walking through the throng with his young daughter on his shoulders closed his eyes and fought back tears.

Hollie Smith and Teeks performed a version of Whakāria mai before the 23,000-strong crowd took to its feet for the national anthem.

More than one person commented on the rarely-used third verse.

"Men of every creed and race,

Gather here before Thy face,

Asking Thee to bless this place,

And corruption guard our state,

Make our country good and great,

Facing what comes next

As people left the venue, it was hard to gauge how they were feeling. Some had to go to work, others to school. Some lingered - couples embracing, friends catching up, kids playing, others debriefing.

Some were marvelling at the ability of horror to bring people together.

A woman who did not want to be named, said "it's like [the country] has been heading down a dark place but in the wake of something so horrific there's so much humanity."

Heidi Watson from Darfield said she had observed an increase in kindness and community. And even at the remembrance there were little pockets of kindness everywhere.

A group of people helping an elderly person stand up, a Chinese man giving away free headscarves. 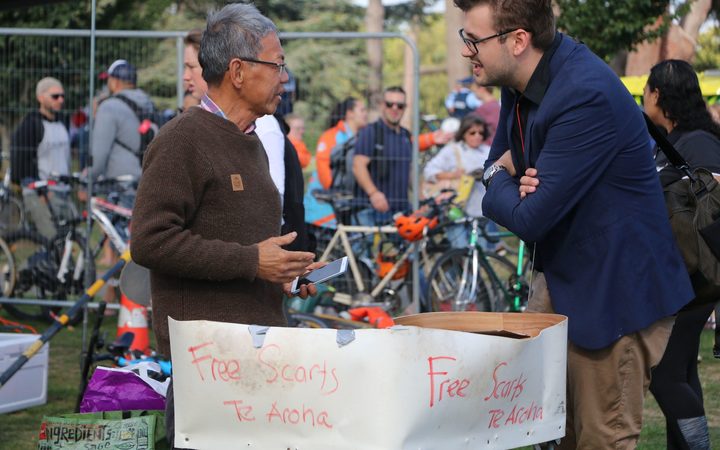 This man was giving away headscarves for those who wanted to wear them. Photo: RNZ / Israa Emhail

For some, today's remembrance may have signalled an end to acute mourning following the attack. It has also shown them hope, community and caring.

"I knew one [person from the victims of the attacks] who was a restaurant owner and businessman, I know [another] two people who got injured.

"I try to get involved, help people, got through the first week that way with the funerals. This week has been a bit up and down. Today it was good to just step out of work and just be here and remember everyone."

He said the event helped with the recovery and healing process for locals.

"It's very hard when something like this happens, especially in a small place."

Imam Mohamed Mohideen, president of the Islamic Council of Victoria, said he flew in from Australia to show his solidarity with Muslims in New Zealand.

"It's not only the Muslims [that] are hurting, even the non-Muslims are hurting, the wider community, [are trying] to come to terms with what has happened and how we can heal together. I think this is how we can work together in moving forward…

"I think the time of being a silent bystander has gone. I think people are now not going to accept this sort of behaviour from individuals.

"Especially for our sisters, it's a big issue, because they are easily identified, and I think now people are realising we need to be there to support each other, whatever race, religion or colour."

Those from the Muslim community who spoke were brave and dignified.

The crowd shared with them resilience, solidarity and hope.

Today's National Remembrance Service not only brought together people from all walks of life, it flagged a strong movement for advocacy against hate speech and division.

For many, it was a sign of the momentum that movement has gained.