There will tight security and a big police presence at today's national remembrance service at North Hagley Park in Christchurch. 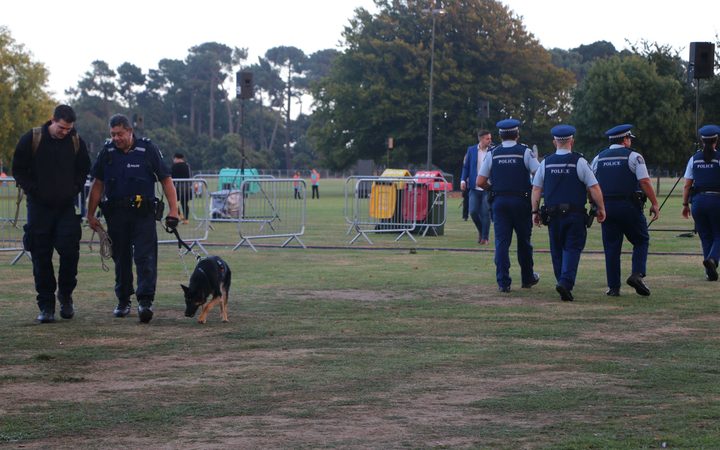 There be a big police presence at today's service. Photo: RNZ / Israa Emhail

Australian police have been brought in to help with the huge security needed for the service for the victims of the mosque terror attacks.

Police in New Zealand have set up Operation Unity in response to the tens of thousands of people expected at events in Christchurch and around the country.

The country has been on high security alert since the 15 March mass shooting which killed 50 people.

Police Commissioner Mike Bush told Morning Report there would be thousands of officers around the country.

"Hundreds of police officers deployed to this police operation here in Christchurch, hundreds that you will see and there are many others that you won't see.

"We've done everything we can to ensure that there are no specific tghreats but of course people need to be vigilant, be visible.

"My advice to anyone: if you see anything that does make you suspicous or worried you'll find a police officer very nearby - go get them."

He said they were thankful for the support of their Australian brothers and sisters, and there were no other nations involved at this point. Snipers have also been posted at points around Christchurch.

"I don't go into the detail but people can be reassured that we have every tactical option available to us.

Police said they have no information to suggest any specific risk to public safety but officers are carrying firearms and keeping a high presence on city streets.

They say it is in the hands of local authorities whether rural communities host remembrance events tomorrow, although there may be fewer events than planned for security reasons.

This morning's service will pay tribute to the victims and those whose lives have been changed forever and survivors from the attack will be supported by Muslims from all over the world.

Cat Stevens, who changed his name to Yusuf Islam after converting to Islam, and Marlon Williams are among several musicians to perform and dignitaries from 59 countries and the UN are also attending.

Flowers and other tributes left at Hagley Park for the victims of the attacks on two Christchurch mosques. Photo: RNZ / Alex Perrottet

There will be free public transport to get to the park but people are being warned to plan extra time because of the road closures around the venue.

The service starts at 10am, and will be livestreamed to events in major cities and broadcast live on RNZ and TVNZ. 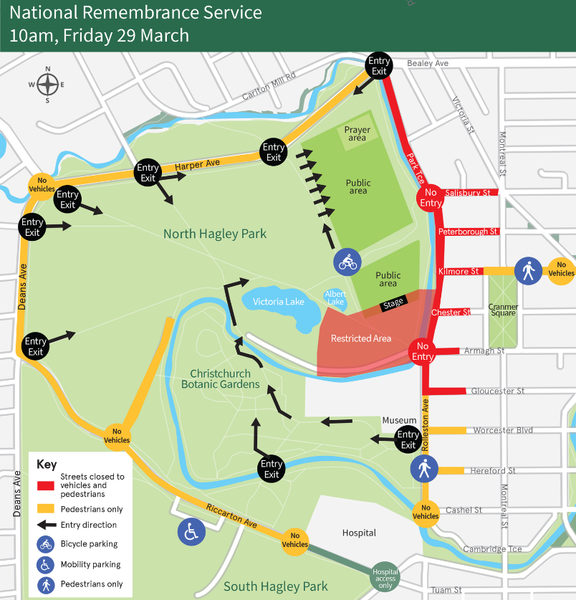 The theme for the service is Ko tātou, tātou - we are one, which was especially important to the Muslim community who put countless hours into organising the event, Muslim Association of Canterbury president Shagaf Khan said.

"It's a message that we are all one, and we are very happy that the Muslim community is included as a local," he said.

New Zealand politicians of all stripes and the Governor-General Dame Patsy will be in attendance, as will their Australian counterparts.

Prime ministers and presidents from the Pacific are also coming, as well as diplomatic representatives from 59 countries and the UN.

There will be several speeches, including from a survivor of the attacks, and Marlon Williams will perform a waiata. The names of all 50 killed will be read out followed by performances by Cat Stevens, Hollie Smith and Teeks.

Some schools in Christchurch will close today, or at least allow staff and students to attend the service.

Burnside Principal Phil Holstein said their decision to close was an easy one.

Mr Holstein, who is also president of the Canterbury and West Coast Principals' Association, said schools had sought guidance from the Ministry of Education about allowing staff and students to attend.

Burnside, Cashmere and Christchurch Boys' High School are closing for the day, while other schools will allow students and staff to attend the service.

The service will be livestreamed to events in Auckland, Wellington, Dunedin, and some regional towns, and broadcast live on RNZ and TVNZ.

Canterbury Chamber of Commerce chief executive Leeann Watson said she expects employers in Christchurch to accommodate staff if they wish to attend, as they have for other vigils and services in the last two weeks.

Muslim advocate Guled Mire told Morning Report the Muslim community had received much support and aroha since the attacks.

"This morning going to the Masjid Al Noor, it was quite surreal. I took in a moment to remember, to try to visualise what it really could've been like," he said.

"Staring at the mosque from the driveway, seeing how much of compact small space it is, I just cannot imagine the nightmare and how intense things would have been at that moment."

Describing it as a very tragic event that was not excusable, "I'm grateful that it's not more people lost," Mr Mire said.

"Its been two weeks, we as a community are feeling much better than we were last week ... the love, support and aroha has been quite immense and has been greatly appreciated by many.

"Many of us still have not had the moment to process this."

MC of the event Julian Wilcox told Morning Report today was going to be emotional for Ngāi Tahu.

Ngāi Tahu had been very forward in wanting to support the community, he said.

"It's going to be emotional for Ngāi Tahu today as well because previous to this event the Ngāi Tahu community and the Muslim community haven't had that much of a relationship.

"If anything has come out of this tragedy it is the fact that Ngāi Tahu has said that 'we have to be united, we have to be together, we have to show aroha to each other'.

"There will be a lot of Ngāi Tahu today. It will be emotional for the tribe."

Free public transport in Christchurch will aid those who do attend, but most of the roads around Hagley Park are closed, including some to pedestrians, so people are being advised to allow extra time for their journey.