Three companies - including one that had been warned three times previously - have been fined more than $150,000 for selling toys which were a choking hazard. 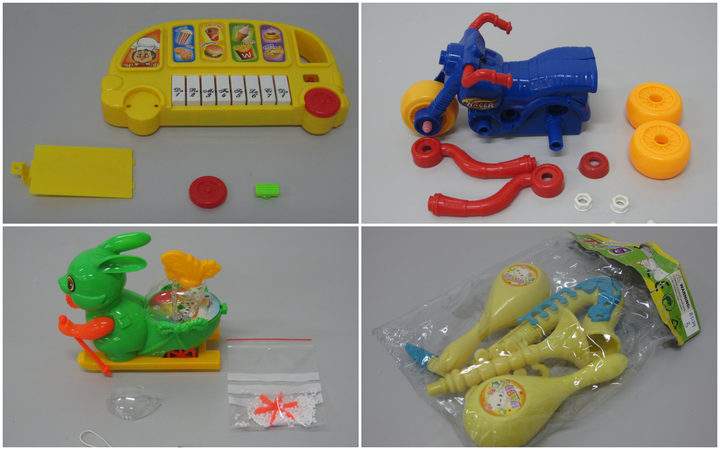 Some of the toys sold that were a choking hazard. Photo: Supplied / Commerce Commission

Commerce Commission head of consumer affairs Antonia Horrocks said Goodview and Joint Future imported some of the toys and supplied them to Ebenezer Trade, which sold them through its 13 "Goods 2 U" retail stores.

The toys, which were sold between 2010 and 2017, broke apart or released small parts during testing.

"We are concerned that none of these companies made themselves sufficiently aware of their legal obligations when it comes to supplying toys for young children.

"If toy suppliers do not ensure their products comply, they put their business at risk of prosecution and their customers at risk of much worse," she said.

All of the charges arose from unannounced visits to retailers in Nelson and Marlborough, and on Auckland's North Shore

ACC figures show between 2014 and 2018 there were 32 claims relating to choking on toys by children aged three and under.

In sentencing the companies in the Auckland District Court, Judge Chris Field said the conduct of all defendants could be characterised as "careless to highly careless".

"All three defendants failed to make themselves aware, in any meaningful sense, of their obligations under the [Fair Trading Act]."

He noted Ebenezer had been warned three times by the Commission over the need to comply with the law.

The commission said consumers who have bought any of these toys should return them to the retailer.