The Turkish Embassy in Wellington has moved to quash fears after the country's president, Recep Tayyip Erdogan, said New Zealanders who went to Turkey with anti-Muslim views would be sent home in coffins. 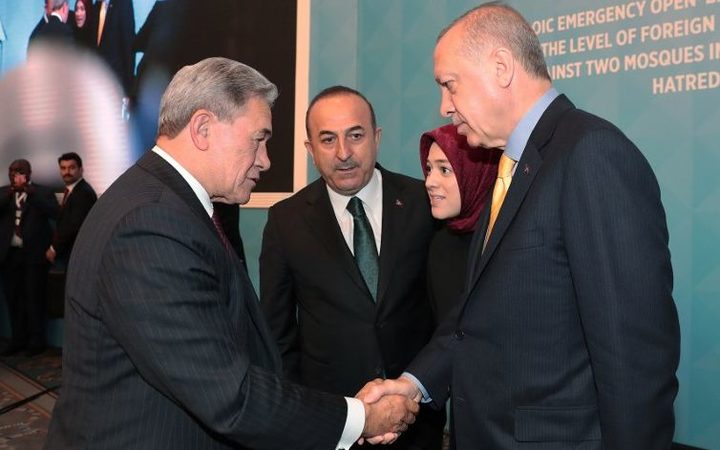 Mr Erdogan has also been airing a video of the Christchurch mosque attacks at his election rallies, prompting condemnation from the government here.

The Turkish Embassy in Wellington today released a statement denying Turkey is hostile to New Zealanders and Australians, and offered reassurance it was safe to travel there.

Referring to New Zealanders as "brothers and sisters", it said it would continue to work to deepen the special relationship the two countries had, befitting their historic ties.

New Zealand Foreign Minister Winston Peters has just returned from Turkey, where he met with Mr Erdogan in Istanbul yesterday for what he called "substantial" talks.

Despite this, a blurred video of last Friday's shooting of 50 people at mosques in Christchurch was subsequently played at a rally in support of the Turkish president.

The screening happened two hours after Mr Peters said he understood such footage was no longer being shown.

Mr Erdogan paused his speech at an election rally in the central province of Konya so that the audience could watch the video footage of the shootings that the accused gunman broadcast on Facebook on 15 March.

He has shown different versions of the video about a dozen times throughout the week.

The video, which governments and social media sites have attempted to take down since the incident, was blurred but the gun shots were heard.

Mr Peters told reporters he did not ask Mr Erdogan to stop showing the video of the shooting because he thought its screening at election rallies had stopped.

"I did not ask that question because I felt that I did not have to ask it, because they are not doing that anymore."

Earlier, in a speech during a meeting of the Organisation of Islamic Cooperation in Istanbul (OIC), Mr Erdogan thanked the people and authorities of New Zealand for their sensitivity and determination against the attack.

He praised the reaction and empathy shown by Prime Minister Jacinda Ardern.

Mr Erdogan, who was seeking to drum up support for his party in local elections, said earlier in the week that Turkey would make the attacker pay if New Zealand did not.

The Turkish president has threatened to send back "in caskets" anyone who tried to take the battle to Istanbul.

He has also called on New Zealand to restore the death penalty in the wake of the terrorist atrocity.

Mr Peters told an emergency session of the OIC that the man accused of the shooting would be held accountable.

"This person will face the full force of New Zealand law and will spend the rest of his life in isolation in a New Zealand prison."

He added later that "misinterpretations" in the days following the shooting had been cleared up following his meeting with Mr Erdogan and the OIC.