Prime Minister Jacinda Ardern has offered a moving statement to those affected by the attack on two mosques in Christchurch today, which claimed 49 lives.

In a press conference from Parliament about 7.25pm, Ms Ardern said it was now clear that this could only be described as a terrorist attack and New Zealand's threat level had been raised from low to high.

"It is with extreme sadness that I tell you that as of 7pm tonight we believe that 40 people have lost their lives," she said.

The number of dead has since been revised to 49.

"It does appear to have been well planned. Two explosive devices attached to suspects' vehicles have been found and they have been disarmed."

She said of the four suspects originally arrested, three were connected to the attack and at least one had stated he was Australian-born. His nationality was something Australian Prime Minister Scott Morrison also confirmed.

"These are people that I would describe as having extremist views, that have absolutely no place in New Zealand and in fact have no place in the world.

"While we have no reason to believe at this stage that there are any other suspects we are not assuming that at this stage."

The fourth person who was not connected to the attack has been released. 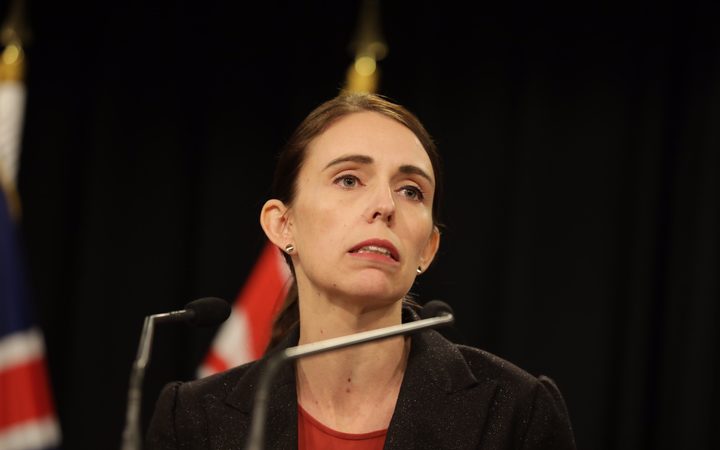 Ardern offers statement to those affected

Ms Ardern said she had spoken to Christchurch mayor Lianne Dalziel and intended to speak to the imam, but first she had a message for those directly affected:

"In fact I'm sure right now New Zealand would like me to share a message on their behalf too.

"And those values, I can assure you, will not and cannot be shaken by this attack. We are a proud nation of more than 200 ethnicities, 160 languages and amongst that diversity we share common values and the one that we place the currency on right now and tonight is our compassion and the support for the community of those directly affected by this tragedy

"Secondly, the strongest possible condemnation of the ideology for those who did this ... we utterly reject and condemn you."

'One of New Zealand's darkest days'

Earlier, Ms Ardern said there was "no place in New Zealand for such acts of extreme violence" after the shootings at two mosques in Christchurch.

The PM said it was "clear this one of New Zealand's darkest days".

Police have stated that they have four offenders in custody after the attack.

"Clearly what has happened here is an extraordinary and unprecedented act of violence," Ms Ardern said.

"Many of those who will have been directly affected by this shooting will be migrants, they will be refugees here. They have chosen to make New Zealand their home and it is their home. They are us.

"The person who has perpetuated this violence against us is not. They have no place in New Zealand.

"There is no place in New Zealand for such acts of extreme and unprecedented violence which it is clear this act was."

She said her thoughts were also with those in Christchurch who were dealing with an unfolding situation.

"Please continue to listen out to information as it comes to light.

"We are potentially dealing with an evolving situation as I said across multiple sites.

"Christchurch Hospital is dedicated to treating those who are arriving at the hospital as we speak."