Disturbing footage is going viral online showing a Māori woman being verbally abused by a man after an alleged roading incident.

The woman in the video posted on Facebook, Erina Wehi, said the verbal abuse was racially motivated.

Ms Wehi said she was cut off by a man on the road on her way to work, when he stopped his car on the side of a road in Bombay, south of Auckland and started abusing her.

She said the first thing the man said to her was that she was a "black piece of f***ing shit".

She said she decided to follow him until he stopped and to film him, to show how racism is prevalent in New Zealand.

"Racism whānau is still and truly alive," she said.

However, the man has denied making racist remarks and said he has laid a police complaint over the woman's driving, over defamation, and for harassment.

"She is sensationalising," he said in a text message to RNZ.

"She instigated the racial comments, not me and nowhere in the video are there any."

He said it was her driving that caused the issue in the first place.

"She got out of her vehicle and abused me in road rage, not the other way around."

He said that he has had to put up with defamation and slander today, as well as abuse from her and a number of her friends. 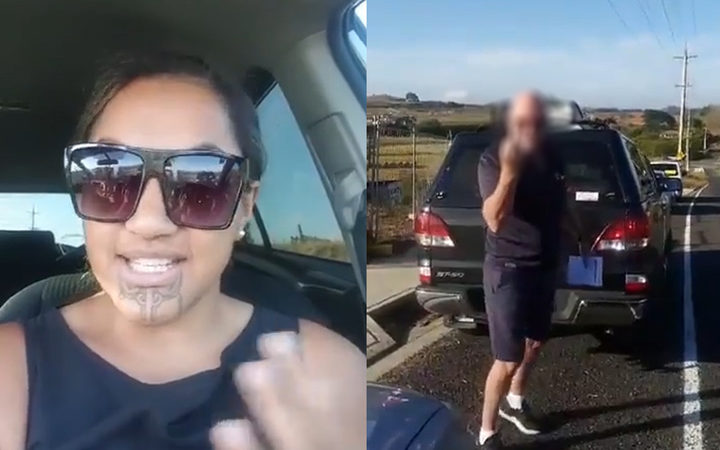 In the video, the man, who is driving a vehicle branded as Alarm Services, repeatedly swears at the woman.

"Haven't you got a job?" the man can be heard saying in the video. "Get a f*cking job you lazy b*tch."

He then continues to call her a "low-life scum".

"The dole queue is down that way - you're in the wrong street, sorry," he said.

A spokesperson from Alarm Services would not confirm if they were the man in the video but told RNZ they were at the police station laying complaints.

Ms Wehi appears to keep her calm throughout the tirade, and points out that she is employed as an education assessor and a mental health facilitator.

The three-and-a-half minute video has been viewed 306,000 times and shared more than 12,000 times since yesterday.