Protestors who occupied BP's Auckland office this afternoon say this is just the start of their climate change campaign.

The group of about 35 protesters, who are part of a climate campaign called Extinction Rebellion, arrived at the offices in Remuera at midday.

They started banging on doors, covering the walls with slogans and shouting chants through a loud speaker to protest the company's burning of fossil fuels.

Messages written on the walls in crayon by the protestors included, 'fossil fools fuel climate change' and 'this is killing our children'.

Extinction Rebellion spokesperson Lynne Dempsey said today's actions were only the start of its campaign against corporations contributing to climate change.

"This is the start, BP, but there will be others," Ms Dempsey said. 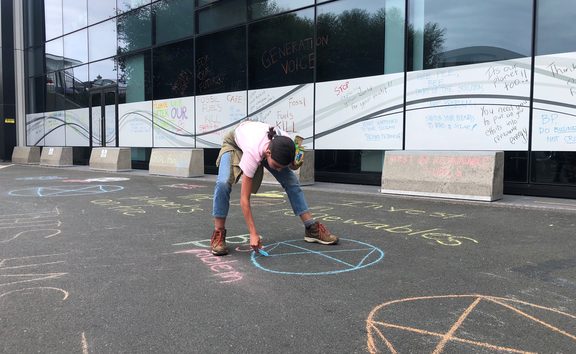 "This will continue until we are listened to," she said. "We will be protesting all through the year and so they will be in practically every other country in the world."

Ms Dempsey said the group would reconvene next week to discuss the next step of its campaign.

Police at the scene had warned the protestors to leave the building or face charges.

The group left the foyer peacefully just before 1pm today.

Ms Dempsey said she considered the protest a success after a representative from BP came out of the office to accept a letter from them. 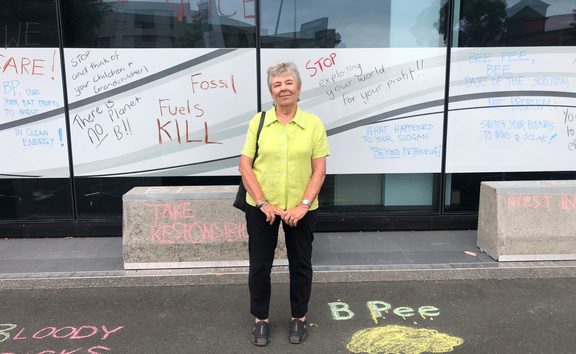 Extinction Rebellion spokesperson Lynne Dempsey at the BP's office today where a group of protesters made their voices heard. Photo: RNZ / Brooke Jenner

She said all the group wanted was for four women to be able to sit down with BP representatives and talk about the letter they had written to the company.

She said the group was "chuffed" a representative had come to collect the letter and listen to the protestors' message, after an hour of protesting.

In a statement, BP said the group was welcome to express its opinions and BP respected its right to do so.