As they barrelled towards a rock face at speed, Brenda and Doug Weening thought it was just another trick their jet-boat driver was using to scare them. 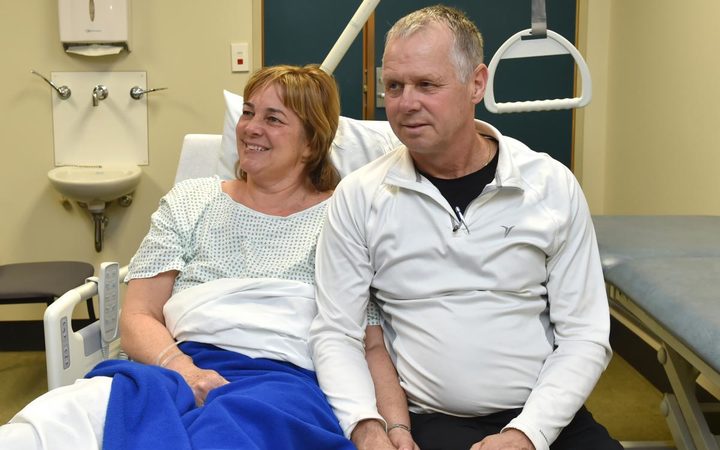 Brenda and Doug Weening are counting their blessings after a "traumatic'' jet-boat accident in the Skippers Canyon on Saturday. Photo: Otago Daily Times / Gregor Richardson

But in the last second before impact, the Canadian couple thought: "We're screwed".

"My last thought was, we're going to hit these rocks," Mrs Weening said.

The Toronto-based commercial carrot-growers were on a Skippers Canyon Jet boat journey up the Skippers Canyon on Saturday - the first activity of their holiday around New Zealand.

Mr Weening said the boat had just completed a U-turn and was headed back down the river when something happened to the boat.

"All of a sudden, the driver couldn't steer, and he knew it. He was kicking something with his foot. And he had lost the reverse.

"Right up until the end we thought it was going to be a trick - he'll pull out, right?"

But the boat crashed head-on into a rock face, he said.

Mrs Weening was thrown from her seat and was left clinging to the side of the boat with a broken leg.

"I was outside the boat. I don't remember how I got there. It all happened so fast.

"Everyone was like scrambled eggs in a bowl. We all got moved around."

She said the driver moved the boat to a shallow area of the river and called emergency services.

"He's a fabulous guy. He was so helpful. He did all he could.

"It could have been much more traumatic but he kept everybody calm.

"He certainly kept it together," Mrs Weening said.

All 10 people on board were flown from the scene by rescue helicopters.

"I just really want to thank everybody for the care that they've given, because it has been traumatic," Mrs Weening said.

Mr Weening said the jet-boat company had also kept in constant communication with them, to make sure they were all right.

The couple sent their condolences to the family of the person killed in yesterday's jet-boat crash near Hawea Flat.

"We feel sad for the family. We're thankful to be alive," Mrs Weening said.

"It makes us realise it could have been a lot worse for us."

The couple said Saturday was just the second day of their 10-day tour around New Zealand, and they had planned to continue to Fiji afterwards.

However, Mrs Weening said she would undergo surgery today to have a metal pin fixed in her leg, and they would return to Canada when she was released from Dunedin Hospital.

"It's certainly been a trip to remember.

"We've heard such good things about New Zealand and we'd still recommend it to everyone.

"We're going to come back some time, but I don't think I'm going to go on a jet-boat again."

Skippers Canyon Jet spokesperson Gavin Larsen said he appreciated the positive comments from the couple about the care they received following the accident.

He was unable to comment on possible causes of the incident until investigations were complete.

*This article first appeared in the Otago Daily Times.