The major water leak in Gisborne was caused by a faulty $50 seal on a pipe, mayor Meng Foon says - but a council official says it was a faulty valve. 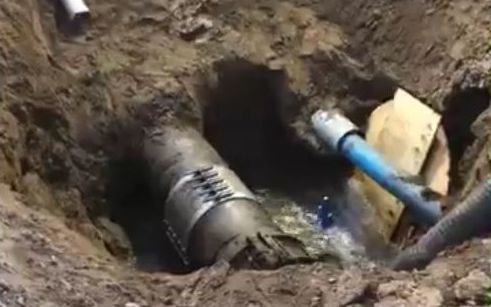 Gisborne District Council revealed yesterday just 24 hours of water was left in its reservoir storage after the leak was discovered in a pipe.

The leak prompted an urgent plea to residents conserve water and industrial users have been told to put their water shortage contingency plans in place.

Contractors worked through the night at the site of the leak at Makaraka.

Mr Foon said the leak was fixed and Fulton Hogan workers completed welding on the pipe.

He said the cause had been a relatively cheap seal on the pipe that had deteriorated and needed replacing.

"I bet the job will cost tens of thousands because of the man-hours and machinery that are involved.

"It's always a fuse or a rat gnawing at something and this time it's a rubber ring that had deteriorated.

But council official David Wilson said the cause appeared to be a faulty valve, not a rubber ring.

He said damage from vibration caused by trucks on the road above the pipe was highly unlikely.

"We have our pipe as do most councils underneath roads all across the country so it's very unlikely."

Mr Wilson told Nine to Noon a significant volume of water had to be flushed through the repaired pipe before it was reconnected to the reservoir, to ensure the water was suitable for drinking.

"Everything going well, we should have the pipe turned back on again mid this afternoon, but it can take up to five hours to make sure that pipe's clear before we can start pumping water again.

"So we really need residents to make sure they're conserving as much water as possible."

A backup plant is taking water from the Waipaoa River.