The jury in Malcolm Rewa's trial has been shown a police video taken at the scene of Susan Burdett's killing. 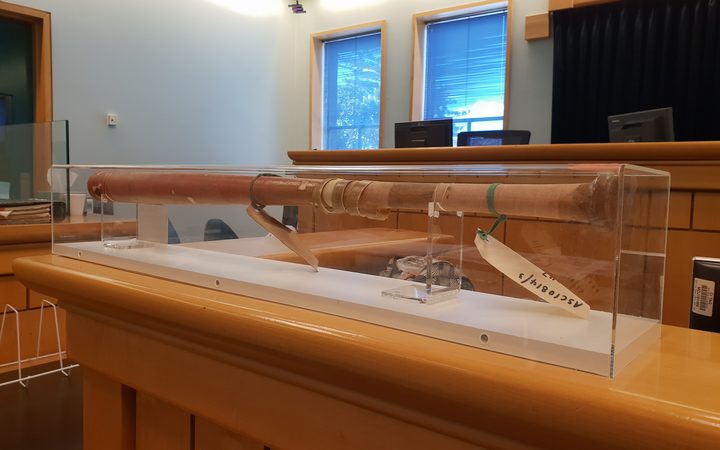 The bat, presented in a glass box as an exhibit, was lying next to Susan Burdett's body. Photo: Photo / Anneke Smith

Rewa, 65, is on trial in the High Court at Auckland this month after pleading not guilty to murdering Ms Burdett.

The serial rapist has been convicted of raping the 39-year-old accounts clerk but juries in two separate trials in 1998 could not decide if he murdered her.

The Crown's case is that Rewa used a baseball bat Ms Burdett kept for her own protection to murder her after he raped her in her Papatoetoe home on March 23, 1992.

A handheld police video taken at the scene of the killing was shown to the jury this morning.

It begins with a slow pan of the large hedge that bordered Ms Burdett's property as police tape flutters in the breeze.

Inside the house, her body is shown on a blood-stained bed in her bedroom.

Ms Burdett is naked from the waist down with her legs crossed and a bra covers her eyes.

A purple crochet blanket is placed over her chest and a bat, presented in a glass box as an exhibit, is lying next to her body.

Shots of other rooms in the house show a tidy home with leafy plants and a spotless kitchen.

Neil Grimstone, a former detective who was in charge of the scene, told the jury it was an unusual crime scene.

"This was quite different to anything that I had encountered before ... it was very orderly; the whole house was tidy."

He said each corner was meticulously dusted for fingerprints during the five-day police examination but those found belonged to people who had legal access to the house - and none were Rewa's.

This came into contention when Mr Grimstone was questioned by Rewa's lawyer Paul Chambers.

Mr Grimstone said he noted Ms Burdett's bedroom window was dusty and undisturbed when analysing the crime scene in 1992.

Mr Chambers put to Mr Grimstone that the killer's only point of entry and exit was the front door; as the police officer had noted how hard it would be to gain entry through the window without leaving a trace.

Neil Grimstone said he believed the front door had been used to exit the house; suggesting the person responsible had climbed through the window.

Yesterday, the jury heard Rewa gained silent entry to a number of homes between 1987 and 1996 to sexually attack women.

It's the Crown's case that features seen in his serial offending are reflected in Susan Burdett's killing.

Rewa has already been convicted of raping Ms Burdett.

His DNA was found inside her body when she died but it wasn't until four years later that it was identified as his.

Dr SallyAnn Harbison, a forensic scientist at ESR, said she tested swabs taken from Ms Burdett's body that were 300 times more likely to have come from Rewa than another man in the New Zealand population.

She also said the lack of blood spatter in the room indicated she had been struck and killed while the duvet covered her head.

Dr Harbison said she couldn't see any visible signs of blood on the bat but found four blood spots when she looked at it under a microscope.

However, test results were inconclusive and therefore there was no forensic evidence connecting the bat to Ms Burdett's killing, she said.