A court ruling against a fire-ravaged church has sparked fears of a precedent being set that will hasten the demise of other heritage buildings. 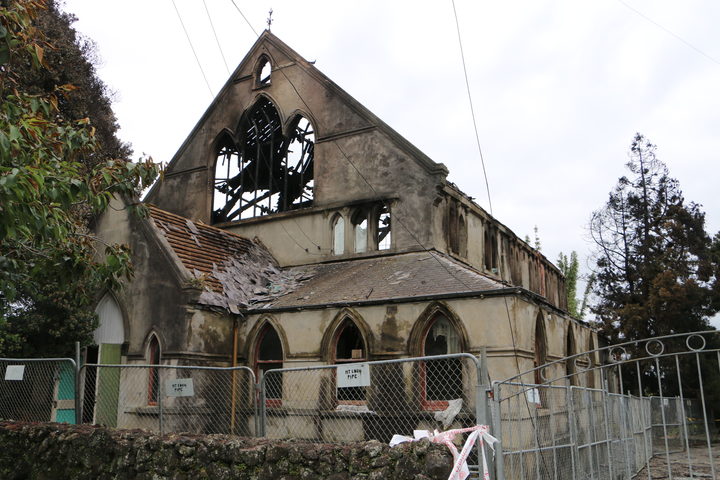 The Environment Court wants the last parts of the St James hall in Mt Eden demolished as soon as possible with a last-ditch attempt to save even parts of it denied.

The police are still investigating whether the fire that engulfed the already-derelict hall just before New Year's Eve was arson.

By the time of the fire it was already too late for the 130-year-old hall, because in mid December, the Environment Court issued a ruling giving a developer consent to demolish it.

It attracted little attention even though it has been a bitter six year long fight, and even though this was a test case - the first application from a developer to demolish a Category B listed building under Auckland's Unitary Plan rules.

Conservationist Allan Matson said the ruling represents a serious threat to other buildings.

"The demolition consent was granted on the basis of the dangerous building notice which has been in place for some six years, and about which council has done nothing, nor have the congregation done anything. And so the court decided that human safety is paramount and the consent must be granted."

The Civic Trust that Allan Matson heads argued in court to save the hall, and the council spent up large on plans of how to use it in a housing development.

But Mr Matson said now, developers will be encouraged to go looking to get a Dangerous Building notice slapped on any structure they want rid of.

"Anything that's dangerous must be demolished, rather than come up with a solution to saving it."

He is perplexed the Auckland Council did not appeal the Environment Courts pro-demolition ruling in December.

So too is an anxious Auckland councillor Mike Lee.

"The judge in this case, he's created a precedent here, which puts every old building heritage or otherwise in some danger if some developer wants to knock it over - 'please give me a consent to demolish it on health and safety grounds'."

Mr Lee is taking belated action now, putting the matter on the agenda of a heritage advisory panel meeting he will chair later this month.

Even after the fire, and an emergency demolition of the riskiest parts, 20 percent of the hall remained standing.

But the court in a new ruling says that must come down too, and quickly for safety's sake.

It's a final blow for the Civic Trust, and the Auckland Council's attempts to save the remnant.

Veteran planner Brian Putt, who gave evidence for the hall's heritage value in court, faults the council for not funding strengthening of the quake-prone hall in the years before it caught fire.

"We need to have a fund available to avoid the dangerous building notice continuing on, so it can be removed, work can be done, the building could have a steel frame put in, whatever needs to be done and then you can have the debate about whether the building should remain or go."

Read the decision of the Environment Court relating to the demolition of the St James hall building (PDF, 2.2MB)

Read the final decision of the Environment Court (PDF, 8.5MB)

The Presbyterian church had a deal to sell the site once the hall was demolished, to developer View West which had apartments planned.

The Church Property Trustees say they will settle with the developer as soon as all the demolition conditions are met.

Meantime, not only the hall site but the whole church next door are already on the market, with bids closing at the end of the month.

The church trustees in a statement say they're saddened the chance to save some of the heritage fabric in a controlled demolition has been lost due to the fire.

RNZ was unable to get comment from Auckland Council at short notice.