In what may be the ultimate New Zealand showdown, two down-under greats have gone up against each other for the first time in 300 years. 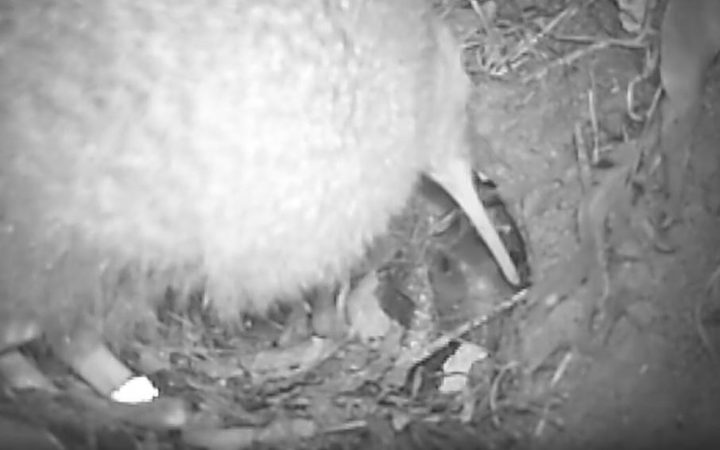 A tuatara pokes into its burrow to find a kiwi inside. Photo: Helen Taylor / Youtube

Footage captured on camera of a kiwi using a tuatara's burrow to nest inside the eco-sanctuary Zealandia shows a fight for the den - with the kiwi taking the victory.

Researcher Helen Taylor said capturing the altercation was just "good timing" and showed how the pair may have interacted in the wild prior to human activity.

"They both get some good shots in, the tuatara gives a few good lunges and the kiwi's having a good old stomp on the Tut's back," she said.

"The kiwi had chosen to nest in a burrow that was already being used by the tuatara so one night after the kiwi chick had hatched and the nest had been in use for quite a long time the tuatara decided to come back and try and use the burrow for himself.

"In the end the tuatara does come back to the nest and he's actually in there with the chick, so that was kind of a worry, but then we didn't see the tuatara for weeks and weeks but we know the chick survived and it fledged and came out of the nest.

"But after that the tuatara came back to the burrow after the kiwi had vacated so he obviously decided it wasn't worth the trouble while they were still there."

Dr Taylor said scientists had little knowledge of how the two species may have interacted prior to human interference.

"It's interesting because these are two species that used to be widespread across New Zealand and they would have encountered each other reasonably regularly but for the past 300 years or so they've been completely separated.

"Human activity has reduced their population so that tuatara were just on a few offshore islands around the country, little spotted kiwi were... just reduced to Kāpiti Island and so for a really long time those two species haven't interacted or come into contact with each other at all."

She said that when tuatara were released into Zealandia in 2005 that was the first time in 300 years they'd come back together and not a lot was known about how they interacted in the past.

Both had similar habits such as eating insects, coming out at night, and sleeping in burrows so would have likely had a lot of natural interaction.

She said knowing more about how the species naturally interacted could be useful in figuring out the best way to increase their population numbers.

"It could be important for management if we did find there was a problem with having tuatara and kiwi together. From this video I don't think there's any evidence of that at all but there are examples of native species that we try and keep apart.

"For example, we try not to put weka in places where there are little spotted kiwi because weka will take out the eggs and historically that would have been fine because there were plenty of little spotted kiwi and you had some balance but at the moment when we only have about 1700 we can't afford that.

"So even though they're both natives we try and keep them apart and that could be the case for lots of other species that have been kept apart historically where we're not always sure about the interactions."

Dr Taylor said she hoped more research would be able to be done on the pair's interactions.