The claims made by junior doctors taking industrial action are being rejected by district health boards. 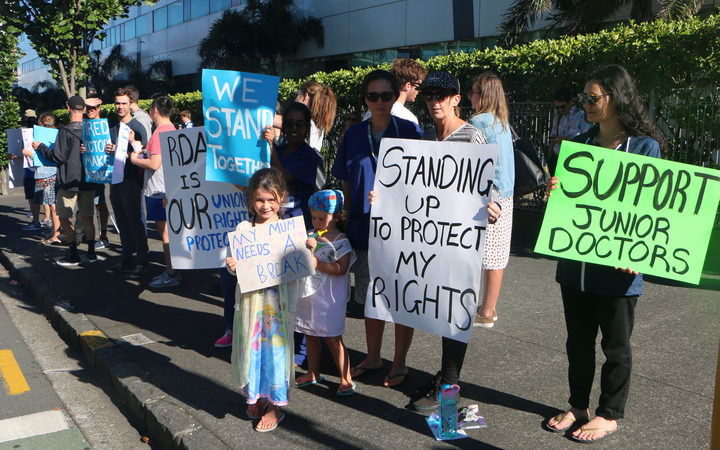 About 3000 junior doctors are on strike for 48 hours until Thursday morning. Photo: RNZ / Brooke Jenner

About 3000 doctors from the Resident Doctors' Association (RDA) were on strike for 48 hours for better employment protection and safer working hours.

Television ads have been running for weeks featuring junior doctors warning of employment changes they say their DHB employers want them to accept.

But in a statement just released, the DHBs reject assertions by the RDA that they want to remove existing rights.

They say it's also untrue for the union to claim they want to move doctors around the country at will.

Additionally, they say they aren't seeking any change to the current provision that duty shifts not exceed 16 consecutive hours.

The DHBs are reiterating that they want local clinicians and hospital managers to make decisions about rosters, not the union's head office.

Meanwhile, a second junior doctors' union which is not striking has seen a bump in membership since its colleagues' industrial action began began.

The Specialty Trainees of New Zealand (STONZ) was set up as an alternative to the RDA in 2017.

SToNZ chair and founder Heath Lash told Summer Report this morning the union formed in response to unforeseen effects of rosters brought about by the last round of strikes from the RDA.

"The ... junior doctor workforce is very varied, so it encompasses junior doctors who are just out of med school to people who have been working for 12, 13 years.

"Not universally, but if you look at the makeup of our members the majority of them are what you would call senior trainees - people who are on a vocational pathway to becoming specialists ... a more senior group."

He said the roster changes had led to a reduction in training opportunities for that group.

"Under the RDA Schedule 10 rosters if you work a weekend you have to take days off during the week the following week.

"These changes the RDA have implemented have led to a significant decrease in the training experience for our members.

"I can see that that would give people a better work-life balance but it means unfortunately that your training is diluted."

The changes also led to dangerously expanded handovers, he said.

"Very complex, complicated handovers and those handovers are not safe for patients."

"There's lots of evidence around the world that the more handovers you have and the more complicated they are the more risk your patients have. It also is more expensive - people stay in hospital longer and you end up doing more investigation."

He said the union supported their striking colleagues but it would be naive to say the formation of the SToNZ union had not influenced the dynamics between unions and district health boards. 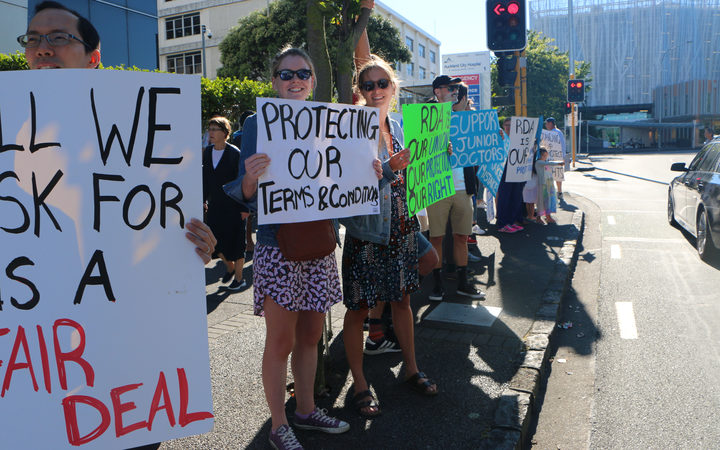 "It's not awkward in the workplace, we've made a very conscious effort to be collegial throughout this process," he said.

"The expectation for our members is that they go to work and do their standard duties. They can be asked to cover but that would be at our normal additional duties and cross-cover rates."

Members of SToNZ had increased dramatically since the 48-hour RDA strike began, he said.

"Before the strike action was public we had approximately 350, 380 members and now we've got 450.

"Before the strike action we were getting two or three members a day, now we're getting five or six."

Hospitals were busier than was planned yesterday but had managed to discharge a number of patients, she said.

"The occupancy isn't as high and our rosters continue to enable us to provide acute and critical care as it's needed."