A UFO organisation with links to the Chilean government is investigating eight reports of strange phenomena across New Zealand skies this year and says sightings are increasing. 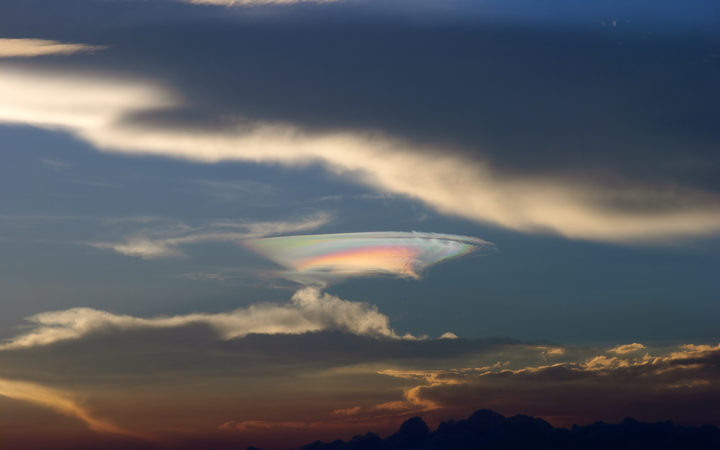 UFOCUS NZ director Suzanne Hansen told RNZ there was an emerging pattern of reported sightings of UFOs throughout the country, involving 'corridors' and 'hotspots' and that many sightings seemed to be associated with seismic events.

She made her comments this week during the 40th anniversary of New Zealand's most famous UFO encounter, the so-called 'Kaikoura Lights' sightings on 31 December 1978, which were filmed by an Australian camera crew and enthralled millions of people across the world.

The UFO research network has a co-operation agreement with the Committee of Studies of Anomalous Aerial Phenomena, a joint military, science and aviation body set up by the Chilean government, which also follows a theory that UFO sightings are associated with seismic activity and is investigating the link.

The groups have carried out joint research projects and have been exchanging information since signing an official agreement in September 2013.

The retired school teacher said the group's team of eight investigators had been busy looking into eight reports of UFOs this year. The team includes former air force staff, an astronomer and science and medical professionals.

"Most reports we receive are from the North Island, which is probably because of a denser population," she said.

"We hear a lot from cray fishermen, truck drivers and farmers, and there are hotspots with a history of reported sightings.

"These areas include the Dome Valley, north of Auckland, which is a particularly creepy area, and the Kaipara region."

She also pointed to a UFO 'corridor' stretching across the North Island, from the Bay of Plenty's offshore islands, through Tauranga and into the Waikato, where there had been a concentration of UFO reports over the past decades.

Data released by the Civil Aviation Authority spanning the years between 2000 and 2017 showed it received 30 reports of UFOs, and interestingly there was a concentration of reported sightings across the supposed corridor Mrs Hansen described, as well as reports spread over the Wellington region and Canterbury.

One sighting the group had investigated this year took place on 28 February at Glenroy, Selwyn, in Canterbury and involved the daylight sighting of a "black aerial object".

The witness, who held a private pilot's license, was riding his motorcycle when he saw an object approaching in the sky, which he described as being like "a squashed doughnut" moving extremely fast without sound.

It was reportedly lost from view as it came close and passed over trees and was "about the size of a living room", he said.

The witness told investigators: "I have flown (aircraft) a lot and I am familiar with most aircraft types, but this was really something else.

"The sheer speed, dark colour and absence of any exterior features were quite remarkable, and I wished that the experience had lasted longer."

She became committed to investigating UFO phenomena following what she described as a harrowing UFO encounter as a 20-year-old teacher in Hawke's Bay during the mid-1970s.

She had been travelling in a car between Takapau and Hastings on a country back road with a friend during late afternoon when they became aware of intense lights above the vehicle.

As the lights got closer, she said they were accompanied by a "vibrational sound" that became higher pitched in frequency until the pair lost consciousness.

She said when they became conscious again, they were still in the car driving, but it was now dark outside.

"It was a feeling of shock and horror, of being unable to logically explain how one second you had spotted erratic lights while driving in sunshine and the next you were suddenly aware of driving in darkness and the lights were gone," she said.

"My friend reacted with anger and disorientation, repeatedly shouting 'what the hell is happening'. It was traumatic."

She said the pair estimated they had lost 90 minutes of time, which they couldn't account for.

The troubling experience remained with Mrs Hansen and in the 1980s she became aware of UFO research in the United States, after which she began helping UFO expert Harvey Cook organise meetings in Tauranga.

UFOCUS NZ was formed and it established a website in 2000 to document sightings.

One of the most dramatic UFO events to be documented however happened 40 years ago today, on 31 December, 1978 - the Kaikoura Lights sightings.

Spectacular light formations were spotted 10 days earlier by the crew of a Safe Air cargo plane.

The lights followed them for several minutes before disappearing and reappearing nearby.

They appeared on Wellington Air Traffic Control radar, on the aircraft radar, and were sighted by hundreds of people.

Then between 31 December and 1 January, an Australian television crew recorded a similar incident onboard a cargo aircraft flying between Wellington and Christchurch.

The large bright objects were filmed, tracked by Air Traffic Control and observed by witnesses simultaneously, with one of the objects following the aircraft almost until it landed.

When the aircraft took off again, it was followed by a huge orb-like object for 15 minutes.

Film footage stunned millions of viewers across the world.

A report by authorities later dismissed the giant orbs as possibly reflected lights from squid boats.