A man who bludgeoned a woman to death with an axe threatened to kill a prison officer while being served dinner, a court has heard. 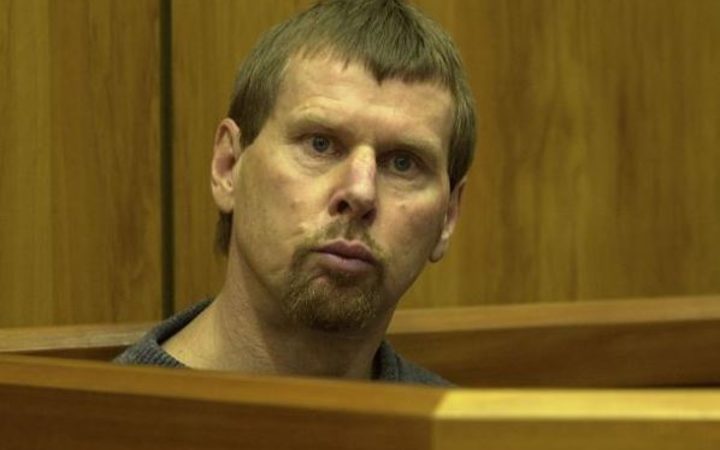 Stephen King, pictured here at trial, has spent the past 13 years in prison after the murder of a Christchurch woman. Photo: Supplied to RNZ by the Otago Daily Times

Stephen James King, 60, is at present serving a life sentence at Otago Corrections Facility for the murder of 45-year-old Ordette Lloyd-Rangiuia in their Christchurch home on 31 January, 2004.

King - described in reports at the time as "a career criminal'' with more than 150 convictions - inflicted 46 injuries to the victim, including 18 blows to her head with the blunt end of a log-splitting axe.

The day of the murder was King's birthday and he celebrated by drinking most of a bottle of tequila and smoking cannabis and methamphetamine, the court heard.

The defendant was sentenced to a minimum period of imprisonment of 16 years, which lapses in 2021.

King came before the Dunedin District Court this week after pleading guilty to threatening to kill.

On 17 August, prisoners were being served their evening meal. A Corrections officer passed King's meal through the small hatch in his cell door and immediately found himself on the end of a tirade.

The inmate began abusing two of the staff members who were dishing out the food and ''when he saw the victim his demeanour escalated to rage''.

''In a very angry voice he looked directly at the victim and threatened to kill him,'' a police summary of facts said.

When spoken to about the incident, King said he hated the victim ''with a passion'' and claimed a change in medication was behind his aggressive demeanour. He nonetheless called his comments ''banter''.

The court heard the Corrections officer had worked at the prison for six years and it was his first experience of such a threat.

He took it seriously and the incident had greatly upset his wife, the judge said.

The term would not affect his parole-eligibility date but would be taken into account by the Parole Board when considering his suitability for release.