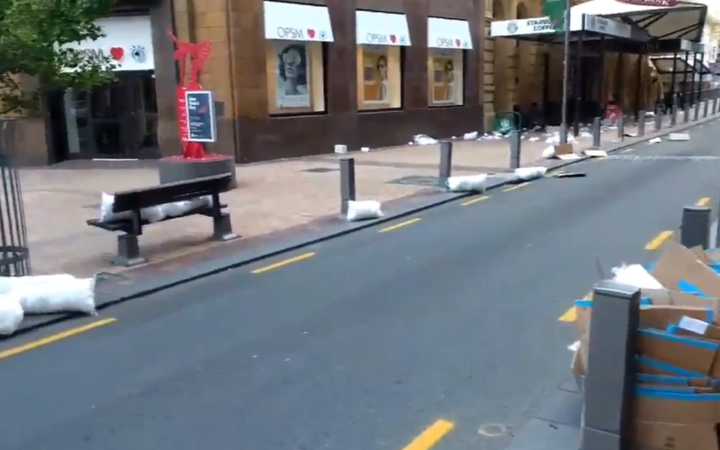 The video by Oliver Lineham shows the waste being blown from a pile outside the Bendon lingerie shop, and he said that the city had an "epidemic" of commercial dumping and "lack of enforcement". His comments prompted a string of critical tweets.

A Wellington City Council spokeswoman confirmed the waste came from Bendon and was dumped illegally because council does not collect plastic bags for recycling.

Workers at another store helped pick up some of the bags on Tuesday evening, and council workers picked up the remaining waste from the street on Wednesday, she said.

Hey @BendonLingerie Wellington. This is your mess.
1) Soft plastic isn't recyclable. You're illegally dumping this every week!
2) It's not secured properly, and ends up all over the street.
3) How are you generating this much plastic EVERY week from one store!? pic.twitter.com/zspAaC0cck

Bendon's national retail manager said they weren't told longstanding collection of their plastic bags for recycling would change. Teresa Gill said their staff had helped collect it after it was swept up in unusually strong winds.

"The past two years it's been going out. It's a shame...if someone had just come forward before with that change, or with a flier."

Bendon staff have now notified other stores on the street of the change, and will organise another way to get their plastic bags into the recycling chain, Mrs Gill said.

Council spokeswoman Victoria Barton-Chapple said council had not changed its practices, but recycling crews do pick up recycling if they don't know what's in the package or think it is residential waste.

Councillor Iona Pannett said the incident was a reminder to retailers to check what can be recycled and secure their recycling well, and to consider switching to paper packaging.