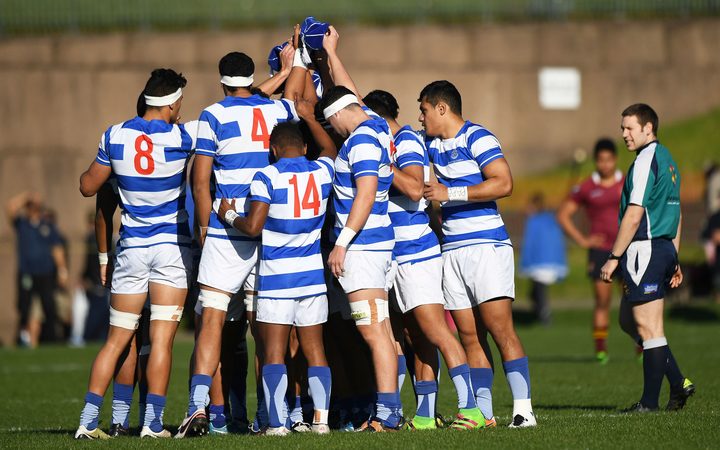 Ten Auckland principals have agreed to boycott major private school Saint Kentigern College in the city's premier rugby competition due to its approach to recruiting players to its first XV.

However, Herschel Fruean of schoolboy rugby ranking system HSTop200.com said the scholarship system, used by multiple private schools around the country, is good for everyone.

"I personally see it as a good thing. I see it from the perspective of a boy and their parents and I see it as a way for a boy to see a better path for the career he wants to take in life.

Mr Fruean said it was wrong to think one school such as St Kentigern had the best players in the country.

"People think that just because they go to one school they're the best person in that position, the New Zealand Secondary School selection and Barbarian selection proves that's not the case," he said.

This year, five St Kentigern players were named in the 26-man New Zealand Secondary schools team, the most out of any school.

Mr Fruean said private schools such as St Kentigern is far from alone in offering scholarships to students outside of Auckland.

"I feel like they're (other schools) are looking at it from a long term perspective. None of these schools have restrictions on who they can go after.

"Auckland Grammar has guys from outside of Auckland, Mt Albert Grammar, Sacred Heart, these schools have guys from overseas and different islands."

Mr Fruean said he wasn't even sure what exactly the opposing schools were complaining about.

"Their [the opposing schools] perspective so far... it's not even showing up what they're arguing about. They're talking about the moral part of it and the integrity of 1A [rugby competition], really the general public doesn't know what your guys' stance is on that so to argue that is irrelevant to be honest.

In a letter to the Head of Saint Kentigern David Hodge, the 10 Auckland principals said he would already be aware that the competition had been a topic of discussion.

"The discussion has rarely centred on the development of the sport, or the welfare of the players, but rather on the establishment and continual review of rules to stem the flow of what is euphemistically referred to as player recruitment.

"This discussion has in more recent years extended to principals around the country and this year has reached a level whereby regional principals have been in communication with a number of current Auckland 1A principals to express their dissatisfaction at losing players to Auckland Schools."

After a meeting was held on Monday 19 November, at which Saint Kentigern College's 1st XV Coach was present, the principals wrote again to the college stating their concerns had been further entrenched.

They said they were also aware a fifth boy was now attending Saint Kentigern College having played the for St John's College in Hamilton's 1st XV.

"It is our view that the enrolment of five senior students from current 1st XV Rugby teams is against the spirit of the 1A competition and underlying purpose of competitive schoolboy sport."

The principals then invited the school to join them in signing up to a code of practice and set of principles which included a ban on player recruitment or inducement from other schools 1st XV, including the offering of scholarships.

If a player was transferred they also wished to place a six game stand down period which would also cover semi-final and final matches.

In a third letter dated 3 December the principals said they were disappointed by Saint Kentigern's response not to sign up, arguing they didn't believe the group of schools could set their own rules.

"It is the immediate decision of each of our schools that in 2019 our 1st XV Rugby teams will not now compete against St Kentigern College."

'They are punishing us'

But in an interview with RNZ, Mr Hodge said he believed other schools were trying to punish his school over the success of its player development programme, which aimed to foster talent both on the rugby field and beyond into personal development.

He said he had received a letter from NZ Rugby praising the programme.

"I believe they are punishing us because we have a tremendous player development scheme that goes way beyond rugby. I have a recent letter from the Rugby Union which praises our programme not only rugby."

He said the programme was designed to help personal development of young people. Because of the programme, it gets "huge numbers" of aspiring young players to come to St Kents.

He said they had asked College Sport, which runs the competition, and New Zealand Rugby to get involved.

"They set the bylaws and rules. All we can do at St Kentigerns is abide by those bylaws and we have. We haven't been charged by College Sport with contravening the rules. We kept completely to the rules.

"It is up to College Sport to determine whether they run the competition or do a group of schools."

One of the principals involved, De La Salle College head Myles Hogarty, said the issue had been around for around a decade and was the result of an increasingly professional college sport environment.

"There's some schools we know that would probably have a budget which is probably similar to some ITM Cup teams across the country and it becomes pretty much win at all costs when you're investing that much resource into your highschool 1st XV. Sadly I think some schools and some players are losing playing for the love of the game. It's become a pathway into a professional career for some.

He said they'd had a number of principal's from around the country voicing their concern and endorsing their stand.

"So we're getting not just Auckland support but national support for these measures.

College Sport has been approached for comment, but Mr Hogarty said they had been kept in the loop.

"College Sport administers the sport but the governance of the game lies in the principals' hands. The principals of the schools are the ones responsible for the programmes that run in their schools.

"I can't speak for them whether they're totally supportive of it yet but I think anything which improves the standard of the sport but also increases participation which is an enormous goal of College Sport, is something they'd support. Statistics will tell you that the number of boys playing the game is decreasing mostly because some of them feel that they just don't have a future in the game beyond a very young school age level."

He said it was too early to say what their decision would mean for the future of the 1A competition, however he expected Saint Kentigern would still remain on the season's fixtures.

"They haven't been kicked out, they still have a place in the Auckland 1A competition. The other 10 schools have just said that's fine but we refuse to play you.

"We'll inform them in plenty of time that we withdraw from that match. I mean you can probably work out what will happen then, Saint Kentigern will probably have possibly one game a year in the Auckland 1A competition by the look of things and that may even change."

That one game would be against Kings College which Mr Hogarty said was yet to decide whether to join the boycott.

Kings College had also been part of the group's concern about recruitment however at since agreed to make changes.

"The latest communication I have is that Kings have agreed to sign the guiding principles and code of practice and that is as of, I think, today."

New Zealand Rugby chief rugby officer Nigel Cass said it was disappointing the schools had not been able to find a resolution but the rugby union was working with Auckland Rugby and College Sport Auckland to resolve the issue.

"We are all conscious that the way forward needs to ensure the best outcome - including a positive rugby experience in 2019 - for everyone.

"New Zealand Rugby has conducted a review of secondary schools rugby in New Zealand, a piece of work to be considered by the New Zealand Rugby Board this month. Player movement was one of the areas highlighted as a concern in that review, and there will be recommendations that look to address this," Mr Cass said.