A High Court jury has taken less than an hour to find the man accused of murdering South Auckland mother Arishma Chand guilty. 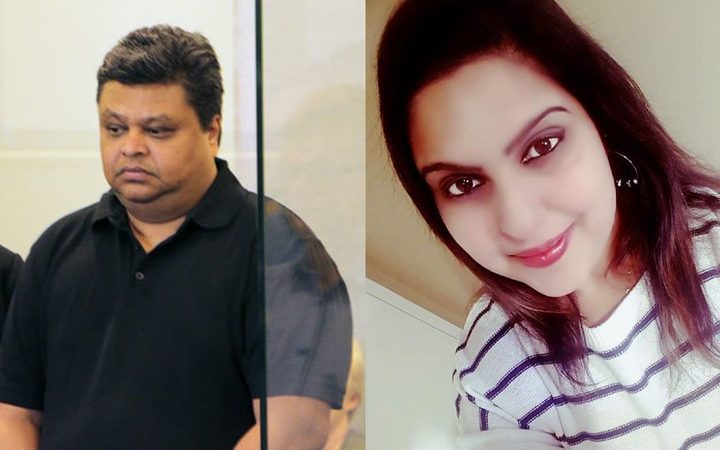 Rohit Singh was on trial for the murder of Arishma Chand. Photo: RNZ / Supplied

Ms Chand, 24, was stabbed to death in her Manurewa home in the early hours of 12 November last year.

Her ex-boyfriend, 42-year-old Rohit Deepak Singh, was charged with her murder three days later and has been on trial in the High Court at Auckland for the past four weeks.

This afternoon after 45 minutes of deliberations the jury returned a guilty verdict.

The Crown's case was that Mr Singh was a jealous ex-boyfriend who became infatuated with Ms Chand during a brief sexual relationship in 2016.

The pair met through Ms Chand's father, who had worked with Mr Singh for a decade in Fiji.

Mr Singh and Ms Chand entered a sexual relationship, kept secret from her parents, when she and her 3-year-old daughter boarded with him in his Flat Bush home.

She became pregnant, but got an abortion and ended their relationship.

Crown prosecutor Claire Robertson said Mr Singh refused to accept the break up and began stalking her. He was messaging her on an almost-daily basis and sending her flowers on Valentine's Day.

"The messages went unanswered but Mr Singh didn't give up. At the end of August, the defendant went to a tattoo parlour and had a picture of Ms Chand's face tattooed on his chest. He then sent a picture of this tattoo to Ms Chand; presumably with the hope that she would change her mind," she said.

In the Crown's opening address, Ms Robertson told the jurors: "It was this obsession which eventually drove him to kill her."

Ms Chand was by her parents in a pool of blood on her bedroom floor in their family home on Maich Rd.

She had 26 stab wounds to her body found on her face, hands, torso and, fatally, her femoral artery.

Ms Chand had also been struck on the back of the head eight times with a heavy, blunt instrument.

Her parents, Rakeshwar Singh and Aradhana Devi, had spoken to their daughter just 15 minutes prior to finding her.

She had called them at 12.51am asking when they would be home, as she was worried about someone being outside the house.

They told her not to worry, that they were on their way home, but they arrived 16 minutes later to find her dead.

The Crown's case was that Mr Singh had been watching the address, waiting for an opportunity to kill her.

In the Crown's closing address, Crown prosecutor Yelena Yelavich told the jury that motive was one of seven reasons they could be sure Mr Singh was responsible for Ms Chand's murder.

"There was a reason for the defendant to move from someone who simply watched and obsessed over Ms Chand to someone who murdered her.

"Following that break up his attitude towards her could be described at various times as lovesick, obsessive, controlling but also resentful, angry and jealous and this proved to be a lethal combination."

Ms Yelavich said it was no coincidence Ms Chand's death coincided with the time she introduced her new boyfriend, Inderpreet Singh, to her parents.

"The Crown says that the defendant knew of that relationship and he knew that Inderpreet had been accepted by Ms Chand's parents. He finally realised she would not return to him.

"He was obsessed, he was jealous and this led him to murder Ms Chand. The Crown says that this was a deliberated, cold-blooded killing."

Singh will be sentenced on 14 February next year.

Speaking after the verdict, Acting Detective Senior Sergeant Brett Shields said the verdict was a massive relief for the family.

"They've gone home now to spend some time with Ms Chand's daughter. She's 3-years-old and has been left without a mum as a result of this tragic case."

Mr Shields encouraged anyone who felt unsafe in a relationship to reach out for help.

"The biggest lesson out of this is if you're in a domestic relationship, or any kind of relationship, where you feel unsafe, I'd urge you to speak to family or friends and if it's serious enough report it to the police. We can't stop what we don't know about. Obviously this is a tragic case and the family referred to him as the silent killer and he really is."