Hospital midwives took their protest over pay and recognition to the streets in Hamilton today. 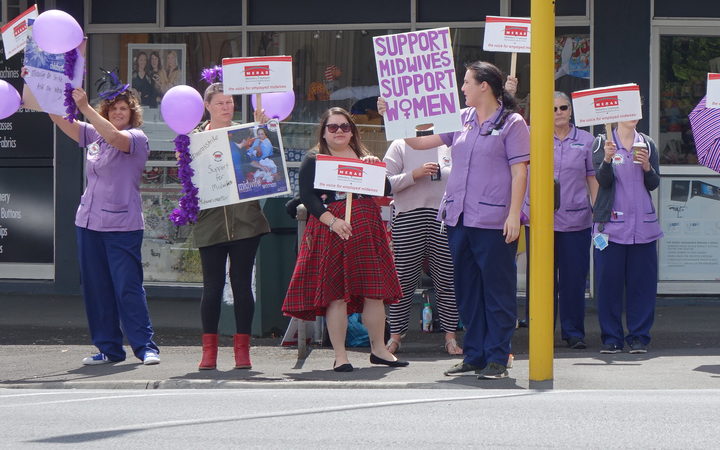 Midwives protest on the streets of Hamilton as part of strike action to call for better pay. Photo: Andrew McRae/ RNZ

About 1100 midwives in the Meras union today began a series of rolling nationwide strikes.

At all but six district health boards, they walked off the job for two hours early, from 11am until 1pm, and will walk out again this evening for two hours from 8pm.

The midwives are being offered the same pay deal that was accepted by thousands of nurses and midwives in the Nurses Organisation in August.

Meras, however, says midwives deserve more, because of their training, skills and responsibilities in hospitals - and they are prepared to fight for it.

About a dozen picketed today in Hamilton, a number reduced by the requirement of many midwives to be on hand in the hospital to provide life preserving services.

RNZ understands midwives also rallied at the Octagon in Dunedin.

Spokesperson for the district health boards, Jim Green, said they hoped the midwives would join them in facilitation or return to mediation to find a way through the pay impasse.

"The offer they've turned down is 9 percent over the next 18 months, plus two pay-step increases and a lump sum payment," Mr Green said.

"It is the same increase offered to other midwives, but they're asking significantly more for doing the same work."

Parts of the Meras proposal go "well outside" the funding that district health boards have to settle the negotiations, he said.